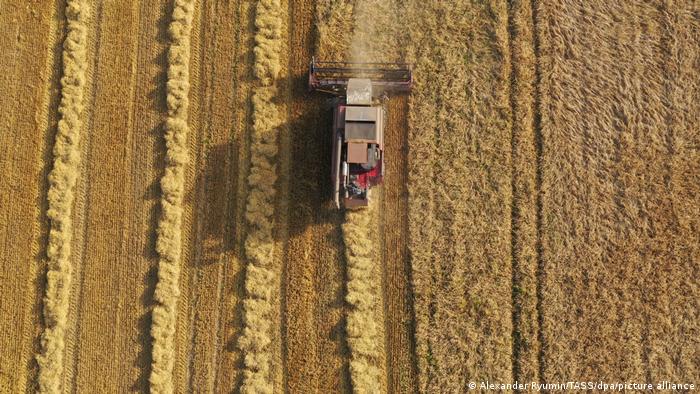 Together, Ukraine and Russia account for more than 28% of the world's wheat production

First, the good news: farmers around the world are growing enough wheat to feed everyone. The bad news is that wheat is becoming more and more expensive, and it isn't growing where it's needed.

Since Russia announced its grain export ban last week, prices have once again skyrocketed. Many countries are fearing famine and protests sparked by a lack of food. Moscow's temporary ban on exports of wheat, barley, rye and other grains is expected to last until at least the end of June.

'Wheat as a weapon'

"With Russia's partial export ban on wheat, Putin is using grain as a weapon and threatening the food situation of poor countries, particularly in the south," said Martin Häusling, agricultural policy spokesman for the Greens in the EU Parliament.

According to Germany's Federal Office for Economic Affairs and Export Control, Ukraine's wheat production accounts for 11.5% of the world market, while Russia's share is 16.8%. When it comes to corn, Ukraine supplies 17% of the world's export market.

It's not just the many countries in Africa and the Middle East that depend on grain from Russia and Ukraine — leading emerging markets including Turkey, India and China do, too.

According to a UN report on the impact of the Ukraine war on trade and development published on March 16, the quota of wheat, corn, barley, rapeseed, seed and sunflower oil imported from Russia and Ukraine amounts to 25.9% in Turkey, 23% in China and 13% in India.

The report outlines how several factors have contributed to create a troubling scenario: higher prices for grain, energy, fertilizer and transport, empty grain silos and the COVID pandemic are threatening food supplies for millions of people and driving hunger and inflation.


While grain silos are well stocked in the EU, the food crisis is currently affecting countries that were already facing economic problems.

"In many places, there are simply no food reserves left," said Simone Pott, a spokesperson for German aid group Welthungerhilfe. "If prices rise again now, there is nothing people can do to compensate."

According to the UN Food and Agriculture Organization, agricultural commodities already cost 31% more on the world market in 2020, the first year of the COVID-19 pandemic , when compared with 2019. One reason given was the cost of storage during the pandemic.

The situation is especially precarious for people in many African countries that rely on imports from Ukraine and Russia.

"There is limited scope to replace imports from the Russian Federation and Ukraine through intra-African trade, as the regional supply of wheat is comparatively small, and many parts of the continent lack efficient transport infrastructures and storage capacity," the UN report states.


Pott told DW that even if countries like Somalia, Benin, Congo, Tanzania and Senegal were able to grow more wheat themselves, the situation would still be critical.

"When fuel and energy prices rise, so do transport prices, and prices for refrigeration. That's why price fluctuations are extremely significant in these countries," she said.

Surveys of Welthungerhilfe's partners in Africa and Asia show how much the crisis has already affected many countries. In Bangladesh, vegetable oil prices have risen by 42%, while wheat is 39% more expensive. In Zimbabwe, Africa's former breadbasket, the price of fuel has gone up from $1.30 (€1.18) to $1.75.

Several West African nations have reacted with political fixes. For the next three months, Senegal and Ivory Coast have imposed a price cap on refined palm oil, sugar, milk, rice, tomato paste, beef and noodles. The Senegalese government is also subsidizing local rice farmers with the equivalent of an additional €76.2 million.

Food 'not being produced where people urgently need it'

She added that the current crisis has shown that countries heavily dependent on Russian and Ukrainian imports have failed to invest in their own production and rural development.