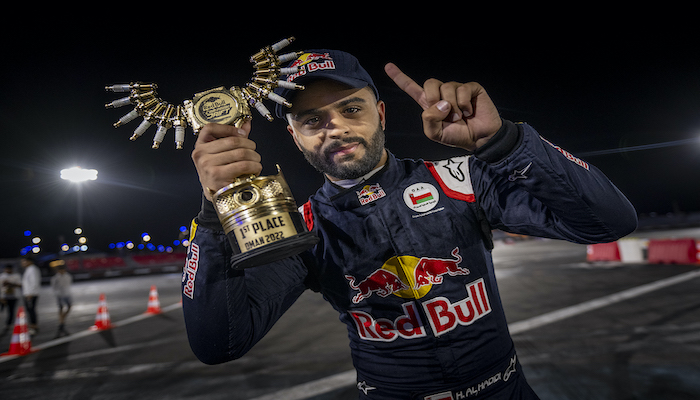 With his astonishing performance that fueled the excitement of motorsports enthusiasts who flocked to the Oman Automobile Association, Haitham showcased his exceptional skills and control over his car in front of an impressed panel of judges and succeeded in snagging the "King of Drifting" title in the Sultanate of Oman, qualifying him for the World Finals Saudi Arabia is expected to host in November.

The Oman national qualifiers for the 2022 Red Bull Car Park Drift Championship were held on the evening of Friday, March 18, on a specialized track at the Oman Automobile Association, which included obstacles and challenges that had drivers putting their best driving skills to the test. The event, which took place in the Sultanate for the twelfth consecutive year, was organized in partnership with the Oman Automobile Association and Red Bull Mobile Oman, and sponsored by Dunlop Tires, the championship’s official sponsor, and a media partnership with Muscat Media Group, Mubashir, and Oman Radio.
After he gave riveting performances in the first round, which gathered 18 drivers, and then again in the second round that was limited to the best 8, Haitham qualified for the semi-finals, where his exceptional skills prevailed. With suspense levels reaching an all-time high, Haitham scored his victory after collecting 292 points out of a total of three hundred possible points, ahead of Ali Al Balushi in second place, who scored 275 points, and Rafaat Al Yahyai in third with 272 points.

A special panel—whose members included rally champions Jean-Pierre Nasrallah of Lebanon and Khaled Al-Manji of Oman, in addition to Wadhah Uqba—worked to decide which performances excelled and set points based on specific technical criteria. To tackle the track, drifters had to have a remarkable balancing act of speed, accuracy, and showmanship, which was heightened in the first round by the look of the car, the roar of its engine, and the smoke of its tires. Eighty-five points of the total balance are allocated to drifting skills, while the rest of the points go to a variety of unique challenges, including squares, spiral gates, flippers, and clips. Additionally, points are given to the ability of drivers to get their cars as close as possible to the cones without knocking into them.
Haitham expressed his delight at winning the qualifiers during the awards ceremony. Interestingly, what distinguished this year’s awards was the fact that they were made from recycled car parts. Haitham confirmed that he is looking forward to competing in the Red Bull Car Park Drift Championship, hosted by the Kingdom of Saudi Arabia in November of this year, with his eyes set on winning the world title that Oman previously won twice back in 2016 and 2017. At the World Finals, the Omani drift champion will face the qualifying winners of several other countries participating in this year’s event, including Saudi Arabia, the United Arab Emirates, Lebanon, Jordan, Qatar, Bahrain, Kuwait, Pakistan, South Africa, Jamaica, Estonia, Georgia, Mauritius, Sri Lanka, and Azerbaijan.

The beginnings of drifting or car show drifting date back to the 1960s, specifically to the rugged terrains of the Japanese mountains, where several racers competed to score the best timing while pushing the endurance of their tires to the limit, before it developed into a sport in its own right.

By 1970, the sport of drifting had garnered wide popularity, carving itself a distinguished position in the prestigious Japan Touring Car Championship, with amazing performances that reflect the drivers' skills in maneuvering their cars. Two decades later, the sport has spread around the world, with many countries including the United Kingdom, Australia, China and New Zealand considering it a bona fide organized sport.

Back in 2008, the Red Bull Car Park Drift Championship was launched in Lebanon, in the indoor car park of a Beirut mall. It was a golden opportunity for drifting enthusiasts to put their skills to the test, all within a sportive framework that adheres to safety standards. The championship witnessed the emergence of Lebanese racing champion Abdo Feghali, who became a legend in the field. Moreover, the unparalleled success of the championship saw it transformed from a regional annual staple into a popular global tournament.