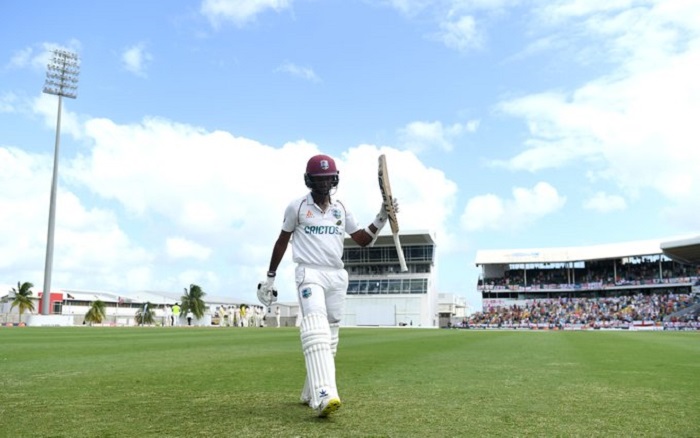 Bridgetown: Top performance by bowlers helped England in coming back to the ruling spot after bundling out West Indies at 411 on Day 4 on of the ongoing second Test here at the Kensington Oval, Bridgetown.

At Stumps on Day 4, England's score read at 40/0, leading by 136 runs. Currently, Alex Lees and Zak Crawley are standing unbeaten at the crease. Resuming at 228/4, West Indies skipper Kraigg Brathwaite was joined by Alzarri Joseph after the dismissal of Jermaine Blackwood on Day 3. They both anchored the innings for some time and but Joseph fell prey to Ben Stokes delivery and got caught by Matthew Fisher after scoring 19 runs.

Following Joseph's exit, Jason Holder came to the crease and could not do much for his side as he was sent back by Saqib Mahmood for 12 runs, leaving the team's total at 351/6. The skipper was later joined by wicketkeeper Joshua Da Silva. The duo played a brief inning, giving an opportunity to Braithwate for reaching to his 150-run mark.

It was spinner Jack Leech who came as savior for the visitors and put an end to Braithwate's wrath of 160 runs. His dismissal was followed by another shock for West Indies as Kemar Roach also lost his wicket on Chris Woakes' delivery.

Veerasammy Permaul was also shown the way back the dugout after scoring just 5 runs. Da Silva, who was looking like the last hope for the hosts, could not stand much and perished for 33 runs by Saqib Mahmood's mysterious delivery and ended his side's batting run at 411.

Later coming to bat, England openers Lees and Crawley began with a steady partnership and took their team's score at 40/0 and provided them with a lead by 136 runs.