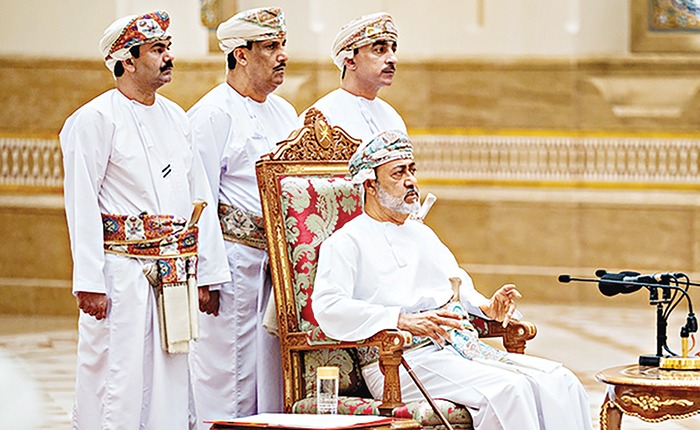 People of Oman welcomed the new directives, saying it will boost private sector and create more job opportunities for citizens

Muscat: Efforts being made by His Majesty Sultan Haitham bin Tarik to improve Oman’s business environment, raise competitiveness in the country and attract investments have been praised by Redha bin Juma Al Saleh, the chairman of the board of directors of the Oman Chamber of Commerce and Industry (OCCI).

The comments from the OCCI, which acts as a representative for the private sector when dealing with the government, came in the wake of His Majesty issuing a number of directives such as cutting down fees required to hire expatriate workers, supporting firms that meet Omanisation targets and SMEs to support the economy, and the addition of 25 more food items to the list of commodities exempt from value added tax to decrease the burden on people’s purchasing power.

The directives issued by His Majesty the Sultan came during a meeting with the sheikhs of Muscat, South Al Batinah and Musandam governorates.

“I would like to express the gratitude of the private sector towards the noble directives of His Majesty Sultan Haitham bin Tarik – may God protect him – to improve the business environment and raise competitiveness and attract investments,” said Al Saleh.

“The Royal directives to reduce the fees for the recruitment of non-Omani workers have a role in reducing costs for companies and institutions,” he added.

Expat manpower fee reductions, added the OCCI chairman, is a great step towards achieving the main goals of Oman Vision 2040, the government’s long-term plan to achieve economic stability and diversification, a good social structure and quality of life and job opportunities for everyone.

“This requires the creation of an empowered private sector that leads to a competitive economy and integrates it with the globe,” added Al Saleh, in the context of how private companies could contribute to Vision 2040.

Complimenting His Majesty’s call for private companies to benefit from the reduction in expat worker fees, Al Saleh added that the revised manpower fees would “reduce the burden on the private sector and support its role in employing the national workforce.”

Fees for expatriate workers have been slashed by more than 85 percent, following the Royal orders issued by His Majesty. Calling this decision by His Majesty a ‘generous gesture’, Al Saleh added that this move could “expand the business of the private sector and the growth of its institutions which will positively affect the national economy.”

“I call on private sector institutions to respond to the Royal directive by taking advantage of this reduction and to increase the pace of providing job opportunities for job-seekers,” he said.

Al Saleh also welcomed His Majesty’s commands for the immediate start of development projects that are urgently needed by the citizens, with other projects to follow suit in accordance with the actual needs of those wilayats.

“The generous directives of His Majesty towards initiating urgent development projects to meet citizens’ pressing needs will have a role in developing the economies of the wilayats,” he said adding that “each development programme will be accompanied by a number of supporting projects.

“The directives contribute to stimulating the business environment and increase opportunities for private sector institutions and small and medium enterprises so that the national economy, with these lofty directives, can look forward to a brighter future,” said Al Saleh.

Citizens expressed their joy at the Royal directives of His Majesty the Sultan during his meeting with the sheikhs of the governorates of Muscat, South Al Batinah and Musandam.

Yahya Al Harrasi, Wali of Bausher in the Governorate of Muscat said, “His Majesty spoke of many wonderful decisions that had a great impact on society directly, especially with regard to reducing manpower for non-Omani fees, as well as support for small and medium enterprises, and other decisions.

Al Harrasi stressed: “There is no doubt that these decisions will have a positive impact on society as well as a positive economic impact in the long run.”

One of the attendees at the meeting also said: “His Majesty the Sultan’s meeting was positive. He focused on the development of Sultan Qaboos Port in the Wilayat of Muttrah, to develop it as a tourist and commercial destination. The port is very important as it will serve the Muscat in particular and the Sultanate in general. His Majesty spoke about the cultural and historical importance of old Muttrah for tourism.”

Another attendee added: “His Majesty also spoke about preventing the dangers of floods in the Muscat and across the rest of Oman. This is an important issue that is of great significance to communities.”