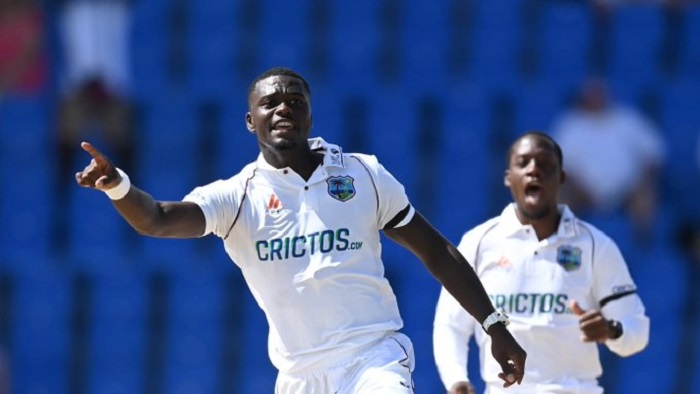 Nkrumah Bonner went on to score his half-century struck a partnership with Joshua Da Silva to take the team's total beyond the 250-run mark.

St John's : Nkrumah Bonner's patient and gritty knock of 123 helped hosts take a 62-run lead with one wicket still in hand after visitors made early inroads on day-3 of the match here at the Sir Vivian Richards Stadium.

Resuming the day on 202 for 4 all-rounder Ben Stokes dismissed Jason Holder caught behind by wicket-keeper Ben Foakes for 45 with only 4 runs added to the overnight score breaking the 79-run partnership.

Nkrumah Bonner went on to score his half-century struck a partnership with Joshua Da Silva to take the team's total beyond the 250-run mark and by lunch, the hosts had put on 271 runs with the loss of five wickets.

The moment partnership started to look threatening Jack Leach dismissed Da Silva for 32 breaking the 73-run partnership for the sixth wicket at 279. In the very next over Craig Overton dismissed Alzarri Joseph for 2 to leave the hosts at 282 for 7.

West Indies desperately needed a partnership as Bonner and Kemar Roach struck a small partnership to take the team's total beyond the 300-run mark as well as help them take a first-innings lead. The hosts went into Tea with 322 runs on the board with the loss of 7 wickets.

After the Tea session, Nkrumah Bonner went on to notch up his second century in 10 Test appearances. The West Indies team looked to take control but lost a wicket against the run of play as Kemar Roach was run out by substitute Ollie Pope for 15 to leave West Indies at 326 for 8.

Veerasammy Permaul then walked in and stitched an important partnership with Bonner as West Indies extended their lead to take the team's total beyond the 350-run mark. Bonner-Permaul struck a 46-run partnership. England captain Joe Root introduced part-time bowlers Dan Lawrence into the attack and the off-break bowler got the prized scalp of Bonner caught behind by keeper Foakes for 123.