Will the Ukraine war plunge the world economy into a new crisis? 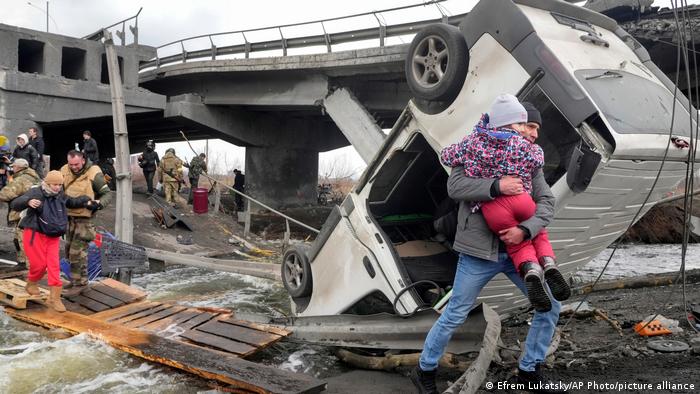 Crises and wars change much, if not everything. After World War II, a new world order emerged from the ruins, including the creation of the United Nations, in an attempt to never let such a devastating war happen again.

The global financial crisis from 2007 to 2009 caused governments around to the world to put financial markets on a tighter leash, strengthening oversight over banks and their complex products.

The COVID-19 pandemic buried concerns about digitization, as more people have finally come to cherish the advantages of remote working.

But now war has returned to Europe, unleashed by a man who thinks it's his duty to correct what he sees as past political mistakes. He is the president of a country that has all it takes to be an economic superpower: abundant mineral resources, a well-educated population and a rich culture.

Alas, this president has miserably failed to put this wealth to any good uses. The billions of dollars earned by the state from commodity sales haven't been spent on catching up with countries on the edge of technological progress. Instead, the "fat cats" — oligarchs and political elites — have squandered this wealth in a mad global race for the most luxurious yachts, the biggest real estate holdings and the most valuable football club.

Will sanctions hit the right ones?


Now we look on aghast at a war being waged brutally and with no clear idea of who will end it and how — how far is the man in the Kremlin ready to go?

We are also seeing unity among Western countries determined to impose sanctions of the utmost severity. The ruble is plunging, credit ratings have reached junk status and financial investors are leaving the country in droves.

But will these sanctions bring about the desired effects? Are they hitting those pulling the strings? Or is it once again the ordinary people again who are suffering? Those who can no longer buy their Levi's jeans and iPhones, or eat out at their local McDonalds?

At the same time, countries in western Europe are hurting, too. Strongly addicted to Russian gas and oil, they are concerned about how to shield their industries from the fallout of diminishing fossil fuel supplies. Many Europeans are anxious about the next winter and whether they'll be sitting in cold homes without these fuel supplies. Already, prices at the pump are going through the roof, with the price of oil reaching unprecedented highs.

This might just be the beginning: Nickel, for example, essential for steelmaking and provided to a large extent by Russia, became 50% more expensive virtually overnight. The same goes for palladium, aluminum and inert gases such as neon and xenon — Russia is a major producer of each.

Recipe for a global recession


Meanwhile, we're taking bets when the price of oil will crack the $200-a-barrel mark. But the safer bet is on a return of inflation to economies worldwide. If we're sure of anything, it's that prices won't be going down anytime soon.

All in all, this looks like a perfect storm for the global economy, which appears set on a course into the next economic crisis.

And all of this in a situation when state coffers have been emptied by a pandemic that swallowed billions in government support. How are we to finance the rescue funds and economic stimulus packages looming around the corner?

In Europe, governments are already hastily cobbling together plans to wean their economies off Russian gas and oil. This is easier said than done and will come at a massive cost. Refilling the continent's gas storage with liquefied natural gas (LNG) rather than Russian gas will increase Europe's energy bill by an estimated €70 billion ($76 billion).

Making do without Russia?

On the other hand, Russia may be thinking twice before shutting off its pipelines to Europe. In February alone, Europeans paid €5.6 billion to the likes of Gazprom and Rosneft who, for example, currently earn between $70 (€64) and $90 for every oil barrel they sell. What usually helps in tight oil markets is pumping more of the crude to drive down prices.

Even so, it may hurt the man in the Kremlin only so much. He's sitting on a pile of cash and has little debt to pay down. After all, he has a staunch ally backing him up. China is eager to secure raw materials of all kinds and new markets for its own products.

The billion-dollar questions — asked, perhaps, prematurely — are: How can we shape a relationship with Russia in the future? Can there be one?

First and foremost, the war against Ukraine must end. Only then can we think about how to reintegrate Russia into the global economy. Tackling this task could be as difficult as solving humanity's other pressing problems, like fighting climate change. This is only possible with Russia — but a Russia without Putin.