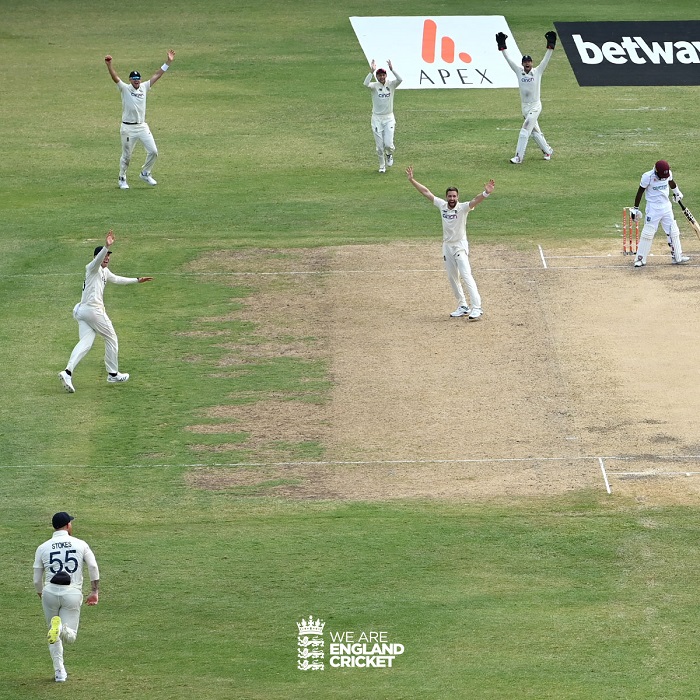 England bowlers were put to a stern test by West Indies batters on Day 2.

St John's: England bowlers were put to a stern test by West Indies batters on Day 2 of the ongoing first Test here at the Sir Vivian Richards Stadium.

Hosts will resume 109 runs behind and with six wickets in hand after a topsy-turvy second day in Antigua and Barbuda. At stumps, West Indies's score read 202/4, trailing visitors by 109 runs with Nkrumah Bonner (34*) and Jason Holder (43*) at the crease.

England's reshuffled bowling attack served up a mixed bag on a tricky day in Antigua, after Jonny Bairstow and co. added 43 to the overnight score to post 311 in the first innings.

A wayward start with the ball from England's new opening pair of Chris Woakes and Craig Overton helped the West Indies openers build a stand of 83 from just 19.3 overs as the reply got off to a rapid start.

Captain Kraigg Brathwaite smashed a quick 55 while other WI opener John Campbell scored 35 before getting dismissed.

Mark Wood, Ben Stokes and Jack Leach bowled tidily, and four quick wickets in the afternoon session threatened to swing the momentum back in England's favour.

But a stand of 75 after Tea between Nkrumah Bonner and Jason Holder helped West Indies to 202/4 by the close, 109 runs behind against a bowling attack who failed to immediately justify England's unorthodox selection policy for the Caribbean tour.