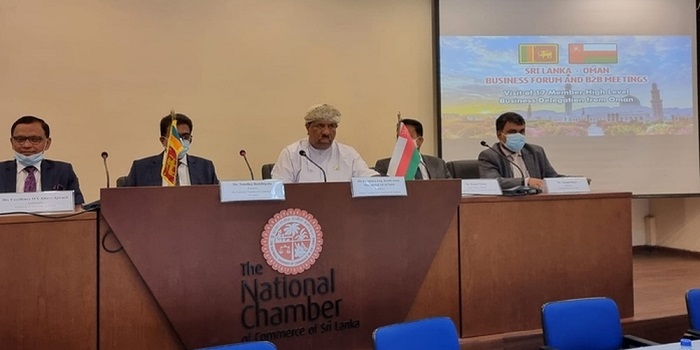 Colombo: The Omani-Sri Lankan Businessmen’s Forum, being organised  on Monday at the National Chamber of Commerce and Industry, Sri Lanka, is exploring ways of forging commercial and investment partnerships.

Eng. Ridha Jumaa Al Saleh, Chairman of Oman Chamber of Commerce and Industry (OCCI), said he looked forward to an expansion of commercial and investment exchange, which experienced a stage of fluctuation over recent years.

Meanwhile, Nandika Buddhipala, Chairman of the National Trade Chamber, Sri Lanka, said that commercial ties between Oman and his country are deep-rooted and that these relations have to be utilized to bolster business and investments. He hoped that such forums will develop economic and investment relations between the two countries.

Ameer Ajwad, Ambassador of Sri Lanka to the Sultanate, said that the two countries boast a wide range of resources that can be utilized to augment investment and commercial exchange between their respective private sectors and business communities.

Likewise, the Sri Lankan side rolled out investment opportunities available in the democratic socialist republic, notably in economic sectors and the port city of Colombo.

During the forum, bilateral meetings were held between members of the Omani commercial delegation and their Sri Lankan counterparts. The meetings shed light on various aspects of commercial and investment cooperation.

The forum saw the signing of a Memorandum of Understanding between the OCCI and the Sri Lankan National Trade Chamber dealing with means of boosting business ties and developing commercial and industrial relations between the two chambers.