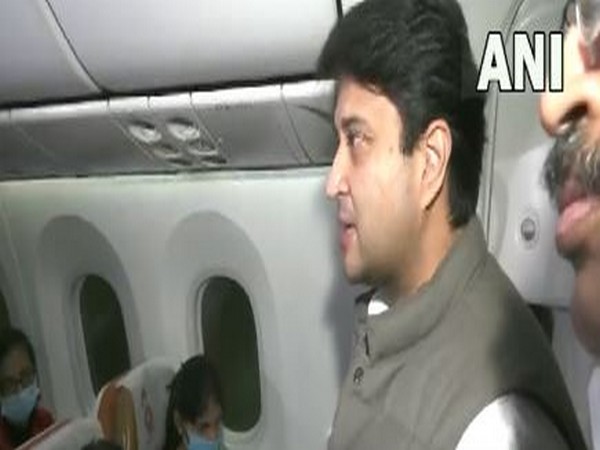 The second evacuation flight from the Romanian capital Bucharest carrying 250 Indian nationals who were stranded in Ukraine landed at the Delhi airport in the early hours of Sunday.

Scindia and MoS MEA V Muraleedharan welcomed the Indian nationals with flowers upon their arrival from Ukraine via Bucharest.

"Every single citizen is back home in India. Please send this message to all your friends and colleagues that we are with them and will guarantee them their safe return. PM Modi is in touch with the Ukrainian and Russian President, conservations are on to ensure that everyone is brought home safely," Scindia said while interacting with Indian nationals at Delhi airport.

The Minister further said, "I am whole-heartedly thankful to Air India for your safe return to India. Jai Hind!."

Students are in panic but the situation was much better where we were staying (near the Romania border) in comparison to other areas of Ukraine, says a student who returned from Ukraine.

The captain of the flight said that the decision to bring Indian students back to the country was taken on shorter notice but it was a well-coordinated effort by airlines, government agencies and individuals involved in the task.

"It was a very unfortunate incident that took place between Ukraine and Russia. We were pulled out for this flight last night but it was a well-coordinated effort by the airlines and government agencies and all individuals. Around 250 people were moved to Romania by local authorities of Ukraine. Interestingly, more than 200 kids were between the age group of 20 and 25 years old," he said.

"We are glad that we could complete this process on time. I would be happy to go again," he added.

Rajni Paul, the Cabin crew in charge expressed her gratitude to the Indian government for undertaking the efforts for the safe return of stranded nationals in war-hit Ukraine.

"We're proud to be a part of the operation to fly home Indians. Some students walked 9-10 km carrying their luggage to reach the pickup point. Thanks to the Indian government (that they reached home country safely)," Paul added.

The third flight to Delhi with 240 Indian nationals has also taken off from Hungary's Budapest under Operation Ganga, informed Minister of External Affairs, Dr S Jaishankar.

Prime Minister Narendra Modi on Saturday spoke with Ukraine President Volodymyr Zelenskyy and conveyed India's deep concern for the safety and security of Indian citizens, including students, present in Ukraine.

He sought facilitation by Ukrainian authorities to expeditiously and safely evacuate Indian citizens.

As the situation in Ukraine continues to be tense, more and more people are migrating to Poland. About 100,000 people have entered Poland from Ukraine over the last several days, a media report said citing the country's Deputy Minister of Interior and Administration Pawel Szefernaker said on Saturday.