Kyiv braces for another night of attacks 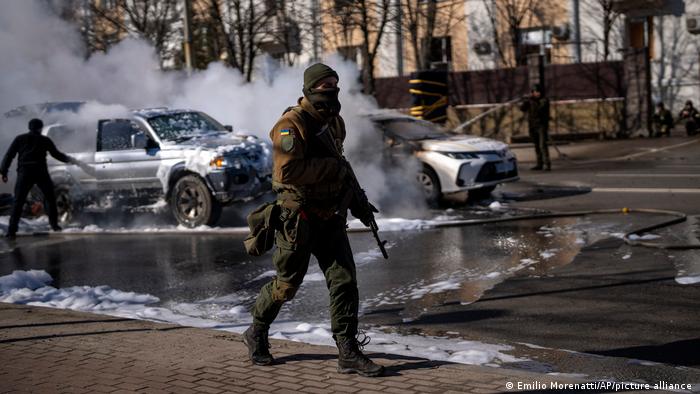 Ukrainian soldiers take up positions in Kyiv, where residents have been told to stay indoors until Monday

Kyiv: There have been multiple reports of two vast explosions in different parts of Ukraine as Russian forces seemingly target vital fuel supplies.

An oil depot in Vasylkil on Kyiv's outskirts was struck, and authorities have issued warnings about hazardous fumes.

The State Special Communications Service of Ukraine said a fire there was burning out of control.

A gas pipeline is also said to be on fire in Kharkiv, the second-largest city in Ukraine. The city was the scene of heavy fighting on Saturday.Russia has restricted access to certain social media platforms to try and keep information of the situation in Ukraine from their people, the latest British defense intelligence update suggests.

According to internet monitoring group NetBlock, Twitter was heavily throttled and, in some instances, even blocked in Russia on Saturday.

Many videos and images of the invasion went viral on social media.

Meanwhile, the hacktivist collective, Anonymous, claimed it hacked several Russian state TV channels and was broadcasting "the reality of what is happening in Ukraine."

The collective also claimed responsibility for hacking the Kremlin, Ministry of Defense, and other government websites shutting them down for most of Saturday

Internet connectivity in the country has been affected by the Russian invasion.

Starlink beams signals for high-speed internet from space but isn't yet available worldwide.

Musk wrote on Twitter that his company was sending internet terminals to Ukraine to use the service, though it was unclear how many.