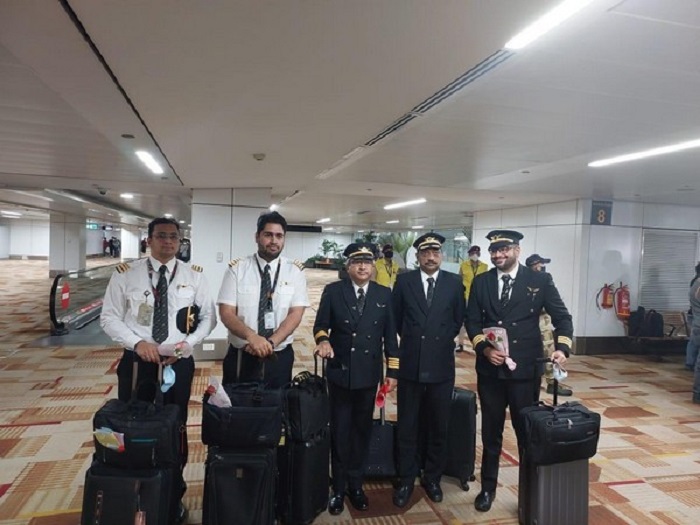 New Delhi : A special evacuation flight of Air India carrying 250 Indians landed at the Delhi airport in the early hours of Sunday. Air India's AI-1942 has been operated as a special charter flight from Bucharest to Delhi Airport.

Aircraft Pilot-in-Command Captain Achint Bhardwaj spoke exclusively to ANI after landing at Delhi Airport and said that all Air Traffic Controls (ATCs), including that of Pakistan, extended support during the evacuation mission. "Interesting that we have good support from all the ATCs network till the Romanian and back to Delhi, via Tehran even the Pakistan, Pakistan has also given a direct route to us without asking due to direct route we saved the time too," Anchit Bhardwaj, Air India pilot told ANI.

Over two dozen of crew members was on board of Air India special aircraft. Five pilots, 14 cabin crew, three aircraft engineers and two security personnel were deployed for the special flight to Romania.

"It was a well-coordinated effort. It was special for us to airlift them (Indian students) back into their home country. We are glad to complete this process on time," said Captain Anchit Bhardwaj on being asked about the challenges he faced.

"We don't fly on the Romania route but usually overfly Romania for Europe but it was well coordinated with ATC and Government," AI Captain said.

According to a viral video, Anchit Bhardwaj, who made headlines around the world after landing the aircraft in the midst of a storm in London, is the one who got the plane to land safely in London.

The third flight to Delhi with 240 Indian nationals has also taken off from Hungary's Budapest under Operation Ganga, informed Minister of External Affairs, Dr S Jaishankar.

Prime Minister Narendra Modi on Saturday spoke with Ukraine President Volodymyr Zelenskyy and conveyed India's deep concern for the safety and security of Indian citizens, including students, present in Ukraine.

He sought facilitation by Ukrainian authorities to expeditiously and safely evacuate Indian citizens.