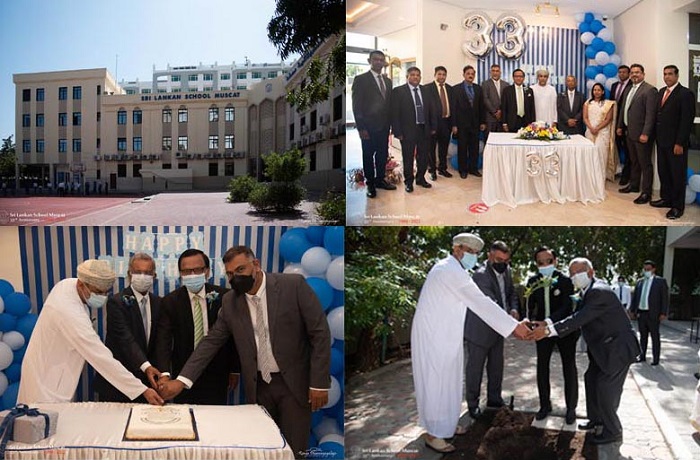 Muscat: Sri Lankan School Muscat has commemorated the 33rd anniversary of its establishment on February 15, 2022.

Gracing the occasion as the chief guest, Ambassador of Sri Lanka to the Sultanate of Oman, Ameer Ajwad planted a Sri Lankan fruit sapling named “Woodapple Fruit (Keth fruit)” on the school premises at Wadi Al-Kabir, Muscat, to mark this special occasion.

Speaking during the occasion, Anselm Perera who is the most senior Sri Lankan national living in Oman, the founder and a former chairman of the SLSM, briefed the success story of the SLSM.

Assistant Director of the International Schools Section of the Ministry of Education of the Sultanate of Oman, Al Azhar bin Saud bin Salem Al Salmi and the founder and former Chairman of SLSM, Anselm Perera graced the occasion as the guests of honour. Chairman of the SLSM Anura Shantha Basnayaka and the members of the Board of Directors, Acting Principal Crisant Jayawardena, staff and the students of the SLSM participated in the event.

Guests of Honour and the participants joined Ambassador Ameer Ajwad in planting Sri Lankan fruit sapling to commemorate the birth anniversary of the SLSM at the end of the event.

The Sri Lankan School Muscat was established in June 1988 by a group of Sri Lankan professionals and was ceremoniously opened on 15th February 1989 with 27 children and 3 teachers headed by Lionel Jayasinghe, the first Principal of the SLSM. Since then, the school has transformed into one of the leading International schools in the Sultanate of Oman, catering to over twenty nationalities. Currently, the school is home to around 1,200 students.