The forty-seven-year journey of Times of Oman 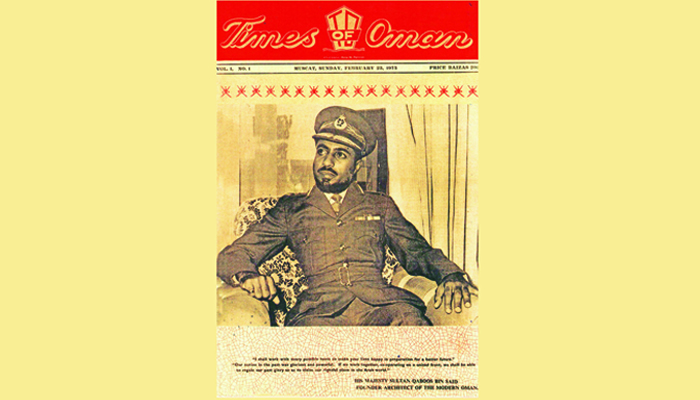 Forty-eight years ago, in late 1974, an English newspaper was perhaps just a dream for the people of the Sultanate of Oman.
So then, was the birth of Times of Oman sheer destiny?  To a large extent, yes!

Times would not have come into existence if that single telex message from Singapore had not reached late Essa bin Mohammed Al Zedjali’s desk while he was serving as director in the Ministry of Foreign Affairs.

The much-talked about telex came from a company called Flying Tiger Corporation based in Los Angeles, USA, asking for an overflight permission and as the director of the department, it was part of Essa bin Mohammed Al Zedjali’s duty to give permission to commercial flights, military flights and personal flights flying over Oman.

They had sent the telex to the Ministry of Foreign Affairs addressing the country as, ‘Muscat, Oman, Saudi Arabia’. Infuriated by the content of the telex, Essa could hardly keep his emotions under control. After three days of soul-searching, he asked himself: Should we blame them for making this error or are we at fault?

In the 70s, there were neither any radio or TV stations. The absence of an English newspaper kept Oman in obscurity.  It was then that the idea of Times of Oman germinated. And then, there was no looking back!

Beginnings are never easy and as expected, it wasn’t for Times either. Time ticked on until D Day, February 23, 1975 arrived!
The Sultanate of Oman witnessed the birth of Times of Oman, the country’s first English daily, in an exciting tabloid format.

It endured competitive challenges, sustained the growing pains and had brushes with unforeseen difficulties to become the most popular English daily of Oman. Since then February 23 is a day of great significance no matter which milestone it crosses.

Though Essa bin Mohammed Al Zedjali is no longer with us, his sons have kept alive his legacy, and continue to honour the spirit with which this publication was first created. Today Times of Oman’s readership includes millions who visit timesofoman.com and the paper’s diverse social media platforms.

Apart from being a market leader on the newspaper front, Times of Oman has also expanded further by launching TFM and TTV. In another first, Times of Oman released the country’s first e-paper in the early 2000s.

Coincidentally, the funeral prayers and burial of the late Essa bin Mohammed Al Zedjali were performed on 23 February, 2013, exactly 38 years after his dream was first realised. Times of Oman will forever remain his lasting legacy to all of us.