Excitement in the air as Tour of Oman begins today 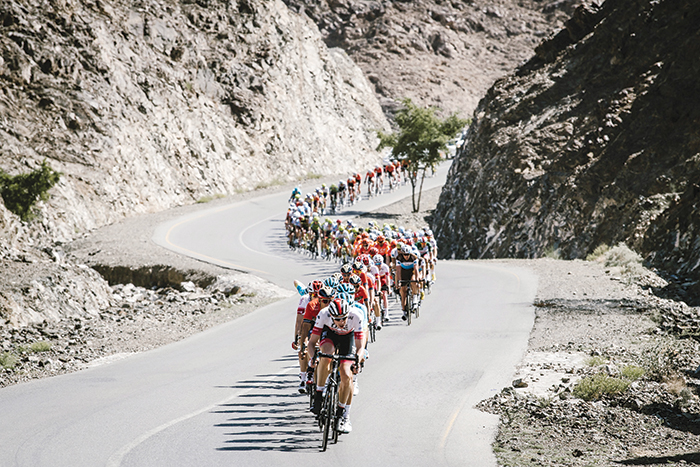 Muscat: Pro cyclists from 18 international teams will take to the asphalt on Oman today, as the Tour of Oman gets underway.

Running from 10 to 15 February, the event will test the mental endurance and physical abilities of cyclists across a route that spans the length and breadth of the country and features a variety of terrains from wide open roads to winding, mountainous paths.

Cyclists will need to be prepped on many levels for the arduous route mapped out for them: stage 1 sees them race across asphalt as they hit the ground running from Al Rustaq fort to the Oman Convention and Exhibition Centre in the capital, Muscat, a distance of 138km.

The riders will need to up and at ‘em for the next day of racing: departing from Naseem Garden, the competitors will hug the coastline as they see who can win the 167.5 km race to the Sohar Corniche. They’re back in Muscat for stage 3, which begins at Sultan Qaboos University and ends a good 180 km later in Quriyat.

After a short journey to Al Sifah by the sea, the drivers begin stage 4 by making a beeline for the Royal Opera House Muscat, some 119.5km away. Stage five takes the riders into the hinterland of the country, and marks by far the most challenging leg of the race: after setting off in Samail, the cyclists will need to brave the steep slopes and thinner atmosphere of Jabal Akhdar, the Green Mountain that stands nearly 3,000 metres above sea level, all the while making sure they have enough energy for the 150.5km they need to complete.

It’s a race to finish in stage six, with cyclists taking off from Al Mouj Muscat and heading for the Muttrah Corniche, covering a distance of 135.5km.

“I’ve been here before and I enjoy the race,” said the Isle of Man native, ahead of this year’s event. “You got mountains, sprints, crosswinds…and it’s a beautiful place to ride. My family was here the last time I raced here and we had a good time.”

Rein Taaramäe, who will be turning out for Intermarche, also has no illusions as to what lies ahead of him.

“I expect to be ready for the start of the season,” he said. “I feel better than I was 12 months ago. The battle for the General Classification in Oman is a nice first challenge.”

The 2022 edition also marks the first appearance at the event by US cycling team Novo Nordisk. The debutants will be led by captain Charles Planet, who has overcome illness to return to cycling after a lengthy layoff.

“I’m so excited to be back racing,” began Planet. “I can’t describe the feeling after having such a tough year in 2021. It’s been a long time since I was at the pointy end of a race fighting for a result and that’s where I want to get back to. I’m actually a bit nervous to be honest, but I’ve worked hard over the winter and done everything I can to be ready, so we will see how my body responds.”

In support of Andrea Peron and Planet will be the experienced Irishman Stephen Clancy alongside the younger faces and legs of Italian Filippo Ridolfo and Dutchman Jan Dunnewind who makes his senior debut for the pro team. Italian Umberto Poli and Dutchman Gerd de Keijzer complete the team, with the latter overcoming chronic knee problems over the last year.

While the organisers are keen to see some racing action, they are also fully aware of what this means beyond just the cycling.

"We have all the ingredients for a successful edition: routes through spectacular landscapes and talented riders,” said Saif Al Rashidi, the chairman of the Oman Cycling Federation. “We aim to promote Oman as a tourist destination, to inspire our youth and the people of this land with the importance of sport, and I am pleased to say that the Oman Cycling Federation is participating this year in the Tour of Oman.” – [email protected]