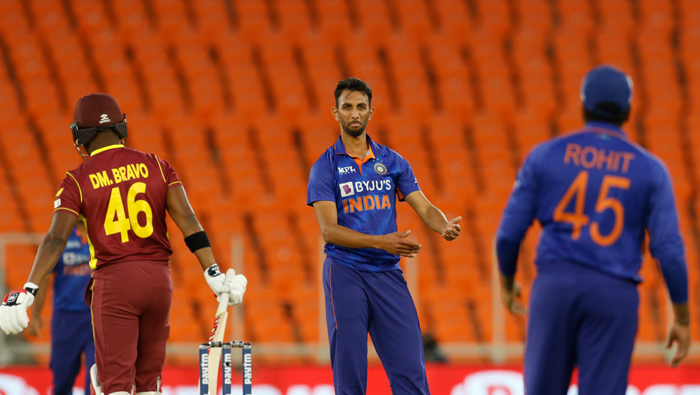 With this win, India has gained an unassailable 2-0 lead in the series. The final ODI will be played at the same venue on Friday. Chasing 237, West Indies openers Shai Hope and Brandon King put on 32 runs for the first wicket, but Prasidh Krishna led India’s fightback as he dismissed King (18) and Darren Bravo (1) in quick succession. Shai Hope (27) also departed soon after as he was sent back to the pavilion by Yuzvendra Chahal and West Indies was reduced to 52/3 in the 17th over.

Stand-in skipper Nicholas Pooran had high hopes of the Windies’ side but even he failed as he scored just nine before being dismissed by Prasidh. Jason Holder (2) went cheaply on the bowling of Shardul Thakur, and the visitors were left struggling at 76/5 in the 22nd over, still, 162 runs away from the target.

Shamarh Brooks and Akeal Hosein put on 41 runs for the sixth wicket, but as soon as Windies innings started coming back on track, Deepak Hooda picked up his maiden ODI wicket as he dismissed Brooks (44) and the visitors were reduced to 117/6. Akeal Hosein (34), Odean Smith (24) and Fabien Allen (13) also chipped in, but in the end, it did not prove enough as India registered a 44-run win.

Earlier, Suryakumar Yadav and KL Rahul might have played knocks of 64 and 49 but the hosts kept on losing wickets at regular intervals, and in the end, West Indies restricted India to 237/9 in the allotted fifty overs.

Virat Kohli (18), Rishabh Pant (18), Washington Sundar (24), and Deepak Hooda (29) all got in, but none of them managed to stay at the crease for a long haul, and this resulted in the Men in Blue posting a score less than the 250-run mark.

For the West Indies, Alzarri Joseph and Odean Smith scalped two wickets each.