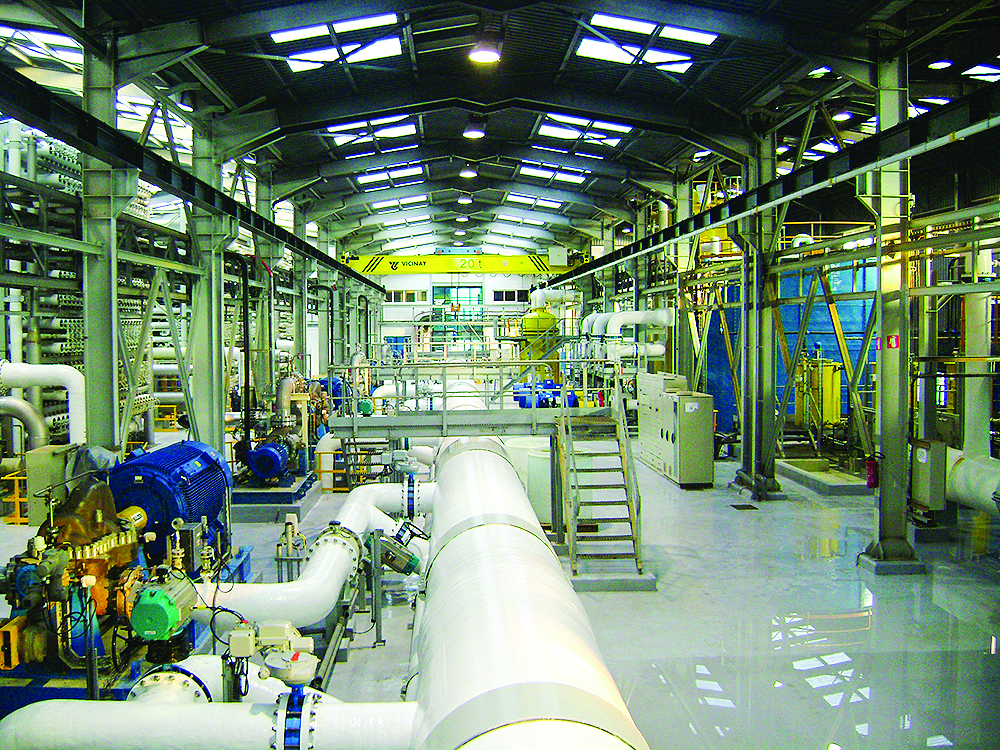 Muscat: Oman Power and Water Procurement Company (OPWP) plans to build a 22 million imperial gallons per day (100,000 cubic meters per day)-capacity seawater desalination project in Dhofar to meet growing demand for potable water.
The proposed project, which will be given to a private developer on a Build, Own, Operate (BOO) basis, is awaiting approval from the country’s Ministry of Finance (MoF).
OPWP, which oversees procurement of all new water and electricity capacity in the Sultanate, has already started an initiative to find a suitable site for the project, according to the seven-year outlook report released by the company.
The desalination project, called Salalah IV IWP, is expected to generate water in 2022, as the state-owned agency expects the need for a large-scale desalination plant for meeting the growing demand for water. The new project is required to meet an annual average growth of 9 per cent in potable water demand for the next seven years—from 42.6 million cubic meters in 2016 to 78.4 million cubic meters in 2023, noted the seven-year outlook report.
Salalah, the capital of the Dhofar governorate, accounted for around 81 per cent of the total water consumption in 2016. This share is projected to decline slightly over the next seven years due to higher growth rates in the wilayats of Marbat and Taqah. The respective growth rates for the wilayats of Salalah, Marbat and Taqah will be 8 per cent, 13 per cent, and 14 per cent per year during the seven-year period.
Salalah IWPP, owned by Sembcorp Salalah Power and Water Company, is the only source of desalinated water for the Dhofar water network at the moment. The Salalah IWPP has a capacity of around 15 MIGD (million imperial gallons per day), uses reverse osmosis technology, and was commissioned in 2012.
In addition to this desalination capacity, the Directorate General of Water (DGW) uses a network of groundwater sources to meet the balance of water demand. DGW estimates that the groundwater supplies have a total capacity of around 100,000 cubic meters per day to 110,000 cubic meters per day. DGW plans to utilise the desalination plants production to meet peak demand, while using the wells capacity to meet the reserve requirements only.
This is also consistent with the national policy to limit ground well production in order to replenish aquifers.
Meanwhile, the much-awaited 22 MIGD capacity desalination project in Salalah, which was tendered by OPWP last year, is expected to be awarded to a winning developer soon. The plant is expected to be brought into commercial operation in 2020. A number of international developers have participated in the tender for developing the Salalah III project. As many as eight pre-qualified bidders have submitted bids for developing the independent water project.
OPWP had earlier said that these firms comprise a consortium of the International Company for Water and Power Projects, Veolia Middle East and Dhofar International Development and Investment; a consortium between Degremont Middle East and Itochu Corporation; GS Inima Environment, Hyflux, JGC Corporation, Marubeni Corporation, Sembcorp Utilities and Tecnicas de Desalination de Aguas.