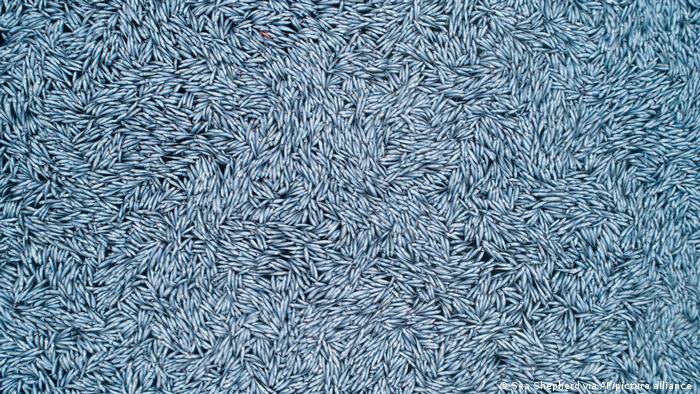 An investigation has been launched by France and the European Union after masses of dead fish were found floating in the Bay of Biscay. Environmental group Sea Shepherd, which works to protect marine life, posted images of tens of thousands of dead fish on the surface of the sea near southwest France.

On Thursday the group posted images of the incident on Twitter saying: "This is what is happening right now in the Bay of Biscay off La Rochelle. Four factory ships operate in the area, including the Margiris, the second largest trawler in the world (banned in Australia)."


France's Maritime Minister Annick Girardin expressed shock after seeing the images and ordered the National Center for Fishing Surveillance to investigate the matter.

The EU's commissioner for the Environment, Oceans and Fisheries, Virginijus Sinkevicius, said the bloc was reacting "immediately" to the "massive discards of fish."

"We are launching an inquiry to national authorities of the fishing area and presumed flag state of the vessel, to get exhaustive information and evidence about the case," Sinkevicius said in a Tweet.

'Tear in net' to blame for incident


The Pelagic Freezer-Trawler Association represents the Lithuanian flagged trawler called FV Margiris. In a statement issued on Friday, the association said the fish were "involuntarily released into the sea" due to a tear in one of the trawlers nets.

"Such an accident is a rare occurrence, and in this case was caused by the unexpectedly large size of the fish caught," the association explained.It went on to say that the matter had been logged and reported to the appropriate authority.

However, Sea Shepherd said it suspected it was a deliberate act to discharge a type of fish that it did not want to process. The practise is known as discharging bycatch and is banned under EU fishing rules.

The dead fish were mostly blue whiting, a sub-species of cod, used in the mass production of fish fingers, fish oil and meal.