U19 WC: Everyone had to maintain strict diet, will enjoy ice cream now, says Yash Dhull 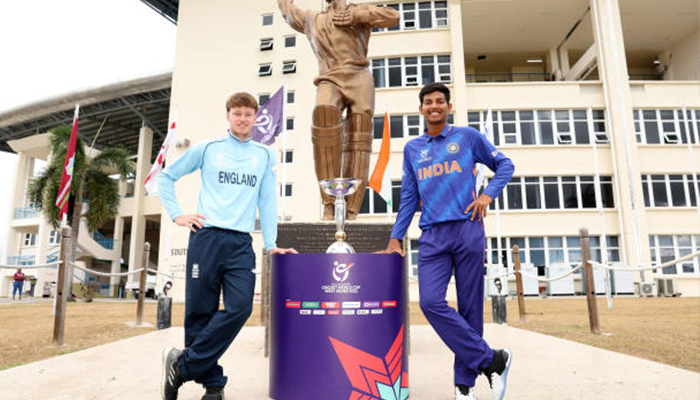 Captain Yash Dhull standing on right side has also won the U-19 WC Trophy.

St John's : Team India skipper Yash Dhull has opened up on how his side will celebrate the U19 World Cup triumph.

India lifted a record fifth U19 World Cup title after defeating England in the summit clash here at the Sir Vivian Richards Cricket Stadium on Saturday.

The Yash Dhull-led side defeated the Three Lions in the summit clash by four wickets. Earlier, India had won the U19 World Cup in 2000, 2008, 2012, and 2018. "The ice cream has reached the rooms of every player, we will have and enjoy ice creams now. We had to maintain a strict diet for this tournament so now we will enjoy some ice cream," said Dhull during a virtual post-match press conference.

Few of the squad members including Shaik Rasheed and Yash Dhull had tested positive for COVID-19 midway through the tournament, but whoever stepped in did their role perfectly and India did not lose a single game in the 2022 U19 World Cup.
"It is a proud moment for everyone, we had to struggle hard, but every player had a strong mindset. Everyone in this camp is mentally strong so that is why we were able to achieve this feat," said Dhull.

40 lakh reward for U19 players small token of appreciation, their efforts are beyond value: Ganguly
The Board of Control for Cricket in India's (BCCI) President Sourav Ganguly on Sunday congratulated the Yash Dhull-led side for winning the U19 World Cup.

India lifted a record fifth U19 World Cup title after defeating England in the summit clash here at the Sir Vivian Richards Cricket Stadium on Saturday. "Congratulations to the under 19 team and the support staff and the selectors for winning the world cup in such a magnificent way. The cash prize announced by us of 40 lakhs is a small token of appreciation but their efforts are beyond value .. magnificent [email protected]," tweeted Ganguly.

Earlier, BCCI secretary Jay Shah announced an INR 40 lakh reward for every player of the U19 World Cup-winning team. He also said that every member of the support staff will be getting INR 25 lakh.

"I am pleased to announce the reward of 40 lacs per player and 25 lacs per support staff for the U19 #TeamIndia contingent for their exemplary performance in the #U19CWC final. You have made India proud," tweeted Shah.