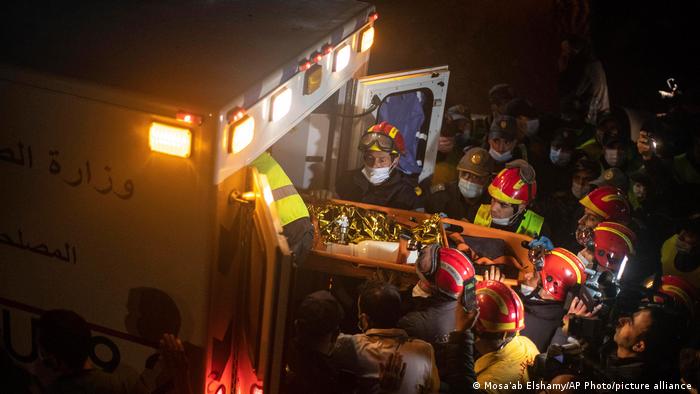 Rescue workers on Saturday extracted the body of a 5-year-old boy who had been trapped in an underground well in northern Morocco.

Many had hoped that the child, called Rayan, had managed to survive the last five days despite low temperatures. He had fallen down a narrow 32-meter (100-foot) deep well in the village of Ighran in the country's Chefchaouen province on Tuesday.

His death was confirmed by state news channel 2M who also tweeted a statement from King Mohammed VI, along with a tribute to Rayan which read: "In God’s protection... We belong to God and to Him we shall return."

The king expressed his condolences to Rayan's parents in a statement from the palace.

Earlier, rescue workers said it was difficult to ascertain Rayan's condition, and many had hoped that it would be possible to preserve the child's life.

Thousands took to social media to express their solidarity for the boy and his family, with the Arabic hashtag #SaveRayan trending for hours in Morocco and North Africa.

The well narrows as it descends from a 45 centimeter (18 inches) diameter at the top. Rescuers were not able to go down themselves to retrieve the child because of the limited space.

A massive trench had to be cut in the hill next to the well. By Saturday morning, rescuers were digging horizontally toward the well and installing PVC tubes to protect against landslides and get the boy out.

Moroccan media reported on Thursday that rescuers had managed to get water and oxygen delivered to the bottom of the well.

"I keep up hope that my child will get out of the well alive. I thank everyone involved and those supporting us in Morocco and elsewhere," Rayan's father told state broadcaster 2M on Friday evening.
How did Rayan get trapped?

Rayan's mother told the media that he had been playing nearby before disappearing on Tuesday evening. "The whole family went out to look for him then we realized that he'd fallen down the well," she said.

According to a male relative the family heard muffled crying coming from the well. They managed to lower a phone with its light and camera switched on. Speaking on Friday, the relative said: "He was crying 'lift me up.'"

The incident attracted crowds of supporters to the village, where they set up camp. Police were sent to the area, and authorities called upon the masses to let the rescuers do their job.