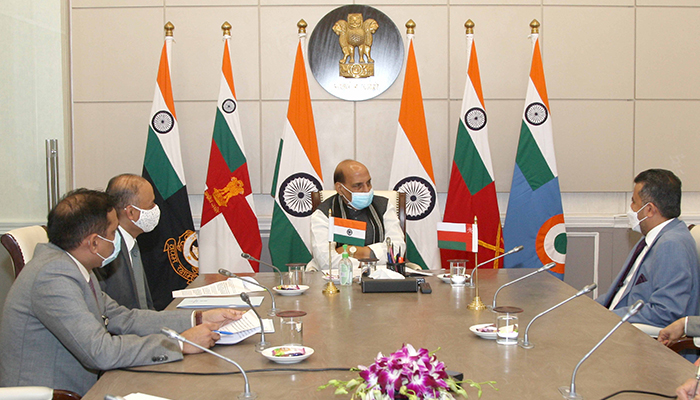 During the meeting, the two sides reviewed the progress made in military-to-military engagements, including joint exercises, industry cooperation and various ongoing infrastructure projects, according to the release.

"It was decided to identify new avenues and examine areas of mutual interest for Joint Venture in order to enhance defence industry cooperation. Conduct of Humanitarian Assistance and Disaster Relief (HADR) exercise involving the three services and enhancing the scope and complexities of the existing joint exercises were also discussed. Both the countries agreed to work together to combat the issue of drug trafficking prevalent in the North Arabian Sea," it added.

The statement further added that it was agreed to hold the next JMCC in Oman on mutually convenient dates.
The JMCC is the apex body between the Defence Ministries of India and Oman to comprehensively review & guide all aspects of bilateral defence cooperation.

The Secretary-General also called on the three Service Chiefs and met with the CEOs of Indian Defence Industries. He will be visiting Cochin Shipyard Limited, Military Training Establishments and the Indigenous Aircraft Carrier Vikrant, during his stay.