Oman come from behind twice to share spoils with Australia 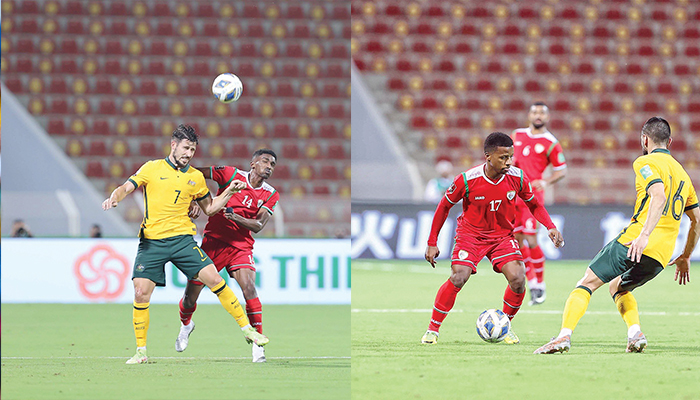 The result sees Oman climb to fourth place in the qualifying group with eight points to their name, seven behind third-placed Australia.

Muscat: Oman played out a gritty 2-2 draw with Asian heavyweights Australia in their qualifier for the 2022 FIFA World Cup, held at Sultan Qaboos Stadium in Boushar.

It was the visitors who took the lead 15 minutes into the game, when Jamie Maclaren converted from the penalty spot after Martin Boyle was fouled in the box.

The Socceroos kept up the pressure until half time, but could not find a way to double their lead. They were made to pay for their profligacy in the second half, when Abdullah Fawaz equalised for Oman with a well-struck effort.

11 minutes before the end of regular time, veteran Aussie midfielder Aaron Mooy put the visitors ahead with an exquisite goal, and Australia seemed to be content with sitting back and defending to preserve their lead for the rest of the game.

Three minutes until the end of the 90, however, Oman were awarded a penalty and Fawaz made no mistake in getting his and his country's second goal of the night.

The result sees Oman climb to fourth place in the qualifying group with eight points to their name, seven behind third-placed Australia.

Oman's next game is against Vietnam, while Australia take on Japan in a crucial game that could decide which team seals automatic qualification for the upcoming World Cup.