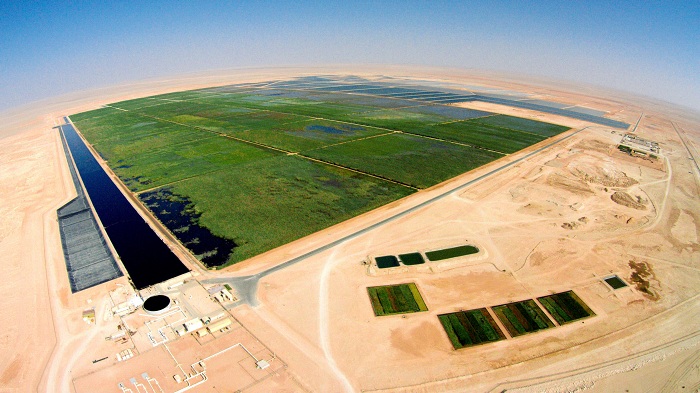 Muscat: The Nimr Reed Beds located in the south of Oman are capable of cleaning up to 95 percent of oil present in water that is brought up from the ground during the extraction of fossil fuels.

In the middle of the Nimr desert landscape of Petroleum Development Oman's (PDO) concession area, Bauer Nimr LLC, a local subsidiary of the German company Bauer Resources GmbH, has now been operating the world’s largest commercial reed bed treatment plant for more than ten years as a partner of PDO.

With an area of 13.5 sq.km, the project is roughly the size of 2,000 football fields and can even be seen on satellite images. The multi-award winning flagship project was awarded to Bauer Nimr by PDO for the biological cleaning of produced water from oil production at its Nimr oil field in the south of the country, with the first phase of the project completed by Bauer Nimr in 2011.

After just three weeks, the plant achieved its first milestone: “We were able to outperform the contractually agreed cleaning capacity of 45,000 cubic metres per day in phase one of the plant,” said Ulrich Emmer, managing director of Bauer Nimr.

“The wetland was entirely designed by Bauer, construction work was successfully completed in 2019 with the third and final expansion. At peak times, up to 175,000 cubic metres, or one million barrels of polluted water, currently runs through the plant in one day.

“This is equivalent to the sewage produced by a city of a million people in a single day, and a total of 428 million cubic metres of water have been treated so far, with excellent results: at the end of the process, the hydrocarbon content is not traceable anymore. Nearly 95 percent of the oil in the water can be removed or recovered without the use of energy or chemicals.”

What makes this innovatively constructed wetland one-of-a-kind is not only its size and remarkable cleaning performance, but also the new standards it sets for sustainability. By treating contaminated water using natural flow processes in the form of terraced ponds and reusing the treated water on the surface for bio-saline agriculture and other sustainable practices, it is no longer necessary to use energy-intensive pumps for circulation, or for discharging residual amounts into the subsoil.

"After ten years of operation, a total of approximately 1.275 million tonnes of carbon dioxide emissions have been saved… the equivalent of the emissions from 25,000 cars over a 10-year period – and according to estimates, by the end of operations in 2044, it will save 4.5 million tons of carbon dioxide,” explained Dr Roman Breuer, managing director of Bauer Resources GmBH. “The reed bed treatment plant is a flagship project in Oman as well as one of the most significant projects run by Bauer Resources and we will continue its operation for another 22 years.”