Istanbul: A destination for all seasons 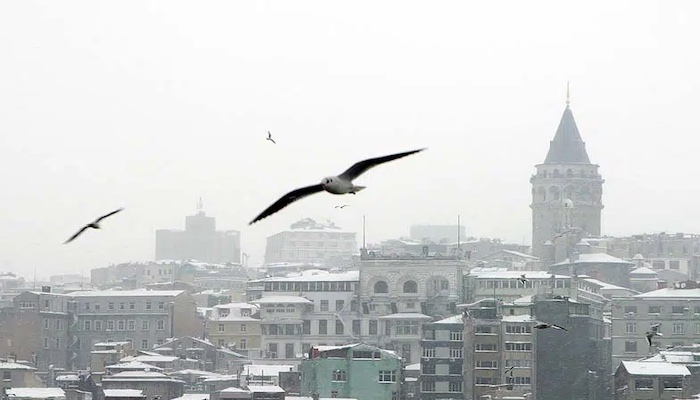 “This city is walked in the rain,
Looking at the barges in the harbor,
Songs hum at night.”

Indeed, İstanbul is a city that one can walk in the rain…and in the snow. And while the city may seem the same, each season delivers a distinct experience.

Even in the chilly winter months, İstanbul warms the heart like a bag of hot roasted chestnuts warms the hands. Wander along streets lined with historical buildings, museums and restaurants and enjoy the calm that seems to come with cooler temperatures. Keep reading and discover the best places to visit in İstanbul when it’s frosty outside.

Panoramic views of İstanbul from the Galata Tower…

Rising from the middle of Beyoğlu, the Romanesque-style Galata Tower has been a constant presence since its erection in 1348. The stone tower, built by Genoese colonists, was restored by the Ottoman architect, Hayreddin in the 1500s. The structure attracts local and foreign visitors throughout the year for its magnificent views; in addition, the Galata Tower features a museum, and a restaurant with panoramic views of the city.

Ascend to the top of the Galata Tower in winter and enjoy an even more evocative experience, with the city blanketed in white snow or fluffy gray clouds.

For centuries, İstanbul has been known as a shopping destination, featuring numerous bazaars and countless shops and ateliers. The Grand Bazaar and the Spice Bazaar are two of the most well-known historical bazaars. Whether you are reside in İstanbul or are visiting, drop into one of these traditional markets, with their spice, jewelry, handicrafts and food stalls. Particularly in winter, these covered bazaars offer warmth, appetizing aromas and hot glasses of tea!

Enjoy the fragrance of roasting chestnuts on Istiklal Street

While some areas in İstanbul become quieter in the winter, Istiklal Street never stops buzzing.

At every step, Istiklal Street brings together people from various places and cultures, to listen to street musicians, ride the nostalgic tram, and sample local specialties in the many cafes. Ride the Tünel, the quaint subway funicular inaugurated in 1875, and stroll along charming French Street, also known as Cezayir Street. And of course, stop by one of the vendors selling fragrant hot roasted chestnuts and try this delicious and warming street snack.

Winter is an ideal time to visit all those historical sites that you meant to see in the summer. The Dolmabahçe and Topkapı Palaces, vibrant symbols of İstanbul’s deep history, are among the most important structures in the city. Brighten a gloomy day with the glittering interiors of these majestic palaces. If going outdoors feels too challenging, read about them and feel inspired.

Discover peaceful Gülhane Park, the subject of songs and poems.

A visit to Topkapı Palace can be overwhelming, so enjoy a relaxing stroll through adjacent Gülhane Park. Beautifully uncrowded during the chillier months, the Park’s paved paths meander amid trees and greenery, including a 300-year-old ‘stony plane tree’. Conclude your idyll at a café, with a cup of tea brewed in an old-fashioned samovar.

In İstanbul’s Küçüksu district, on the Üsküdar-Beykoz coastal road, the ornate, waterfront Küçüksu Pavilion was among the preferred boarding pavilions used by the Ottoman sultans. The original wood villa is believed to have been built in 1752; the current structure, made of stone, was built in 1856 by Sultan Abdülmecid. Also known as Göksu Pavilion, its décor was designed by Sechan, the decorator of the Paris Opera, who is also responsible for the interior design of the Dolmabahçe Palace. For another heart-warming İstanbul experience, visit the Küçüksu Pavilion and enjoy the crisp Bosphorus breezes.

A terrific winter activity in İstanbul is to visit one of the city’s numerous museums. In Sultanahmet, the Archaeological Museum and the Turkish-Islamic Arts Museum are highlights, as is the İstanbul Naval Museum, in Beşiktaş, or the Istanbul Military Museum, in Harbiye. In Beyoğlu, the charming Pera Museum offers interesting temporary exhibits; its permanent exhibits include Osman Hamdi Bey’s renowned painting, the Tortoise Trainer.

Listen to the sounds of İstanbul at Pierre Loti

In the Eyüpsultan district and overlooking the Bosphorus, Pierre Loti Hill takes its name from the French naval officer who frequented the teahouses in the area and wrote his first novel in İstanbul. Even one visit to Pierre Loti Hill, with its views of the Golden Horn, offers a unique perspective of the city. In the winter, order a cup of hot salep, the milky drink made from orchid tuber flour, and savor the ambiance. The Hill can be accessed by car or foot, as well as a cable car. As the path is steep, we recommend going by cable car (you can use your İstanbul card), especially in the winter months.

Descend into the Basilica Cistern

Located quite close to the Hagia Sophia, the Basilica Cistern is the largest closed cistern in the city. It was built during the Byzantine period to address the water needs of the city and the palace. Inside, there are imposing marble columns; two of these pedestals feature carvings of the head of Medusa.

Sample boza (a thick, slightly fermented millet drink) in its original neighborhood
Boza is a traditional winter beverage in Istanbul and the best place to drink it is in the Vefa district in Fatih, İstanbul. Fermented grain drinks were a staple in the Fertile Crescent for centuries, but the original Turkish version of boza is believed to have originated in the 10th century. The alcohol-free boza recipe perfected in the Vefa neighborhood is sweeter than the original drink, which had a low alcohol content, and is often topped with powdered cinnamon and roasted chickpeas.

*The date of this blog post may have been updated due to additional content. Please be aware that information on fees and transportation is subject to change. The content of this post reflects the author's opinion and views.

You may visit https://blog.turkishairlines.com/en/ to get more details about destinations which Turkish Airlines cover in its network.