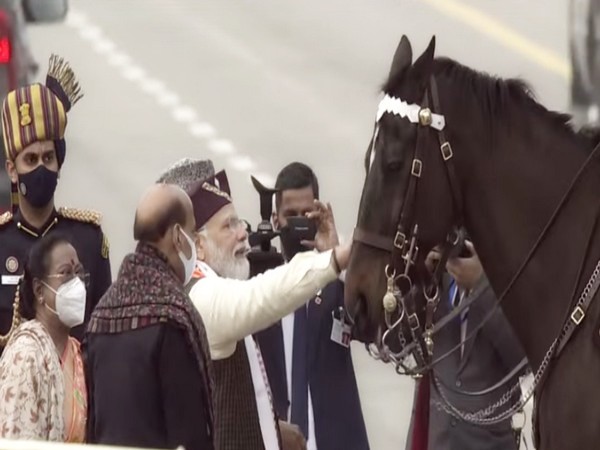 "We make a relationship of love with every conscious being. We also got to see a similar sight this time in the Republic Day parade as well. In this parade, the charger mount of the President's Bodyguard, Virat took part in his last parade," the Prime Minister said while addressing the first episode of this year's Mann Ki Baat.

"Horse Virat came to Rashtrapati Bhavan in 2003 and used to lead the parade every time on Republic Day as Commandant Charger. Even when a foreign head of state was welcomed in Rashtrapati Bhavan, Virat used to play this role. This year, on Army Day, horse Virat was also given COAS Commendation Card by the Army Chief. In view of Virat's immense services, after his retirement he was given farewell in an equally grand manner," he added.

President Ram Nath Kovind was joined by Prime Minister Narendra Modi and Defence Minister Rajnath Singh as they bid farewell to the trusty steed, which participated in its last Republic Day parade at Rajpath in the national capital.

Virat was awarded the Chief of the Army Staff Commendation earlier this year on the occasion of Army Day and is the first horse to receive the commendation card for exceptional service and abilities.

It is unique and distinct as Virat was the first horse of President's Bodyguard being conferred with this award exclusively for his role as "charger". The magnificent dark bay charger of the President's Bodyguard arrived in 2003 at age of three from Remount Training School and Depot, Hempur and soon became a cynosure of all eyes. His elegance, grace and natural beauty coupled with sublime nature made him everyone's favourite.

On several occasions in the past, Virat, as Commandants Charger, has been escorting the President for Republic Day parades as well as receiving the visiting Heads of States during ceremonial receptions at Rashtrapati Bhavan for the last 13 years.

Despite horses being flight animals, it was his flamboyant attitude and independent nature that made Virat a fearless horse ready to lead all parades. Virat's ability to listen to the faintest of whispers of his rider amidst the clamorous cheering on Rajpath during Republic Day Parade made him the most trusted horse. His flowing mane, dazzling tail, a natural high arch of head with a soft eye that could melt any heart earned him the title of the King amongst the PBG horses.

The PBG has that the horse shall continue to adorn the stables of PBG till he breathes his last.