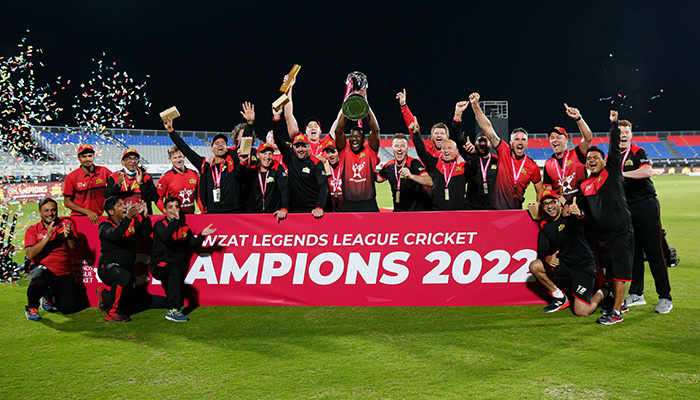 World Giants have become the first side to win the Legends League Cricket tournament.

Muscat: The World Giants have become the first side to win the Legends League Cricket tournament, beating the Asia Lions by 25 runs.

Held at Amerat Cricket Ground in Muscat, the tournament has seen some of cricket’s greatest names, including Brett Lee, Shoaib Akhtar, Jonty Rhodes, Mohammad Kaif, Kevin Pietersen and Sanath Jayasuriya, among many others, come to Oman to showcase the very skills that are their claim to fame.

The latter rounds of the tournament were also held in the absence of fans, owing to decisions taken to prevent the spread of COVID-19 in the country.

Batting first, the World Giants put up a score of a mammoth 256/5, aided by an excellent 94 off just 43 deliveries by Corey Anderson. The Giants' score was the highest recorded in the tournament.

He was able to add plenty of runs to a good start to the Giants' innings, courtesy a crisp 48 by opener Kevin Pietersen.

The Asia Lions had been hoping for Shoaib Akhtar to spearhead their bowling attack, but the Rawalpindi Express was derailed after suffering an injury, and had to hobble off during his third over.

Nuwan Kulasekara was the pick of the Asia Lions bowlers, with figures of 3/45 from his four overs. Countryman Tillekaratne Dilshan was far more expensive, conceding 53 runs in his three overs.

In response, Asia began brightly, knowing they had a tall order in front of them. The Sri Lankan duo of Sanath Jayasuriya (38) and Dilshan (25) were both dismissed by Morkels Albie and Morne.

Despite good starts from those who came after, including Upul Tharanga (25) and Asghar Afghan (24), there was no solid partnership to really get the Asia Lions going. Captain Misbah Ul Haq, who many had hoped would anchor the innings with wickets steadily tumbling around him, got out cheaply for just two runs, becoming Albie Morkel’s fourth wicket of the day after the South African also dismissed Afghan.

Some hope did come in the form of a good stand between Mohammed Yousuf and Mohammed Rafique, but that partnership ended when the latter was dismissed for 22, courtesy good work from Englishmen Ryan Sidebottom and Monty Panesar.

With only the tail of Chaminda Vaas, Muttiah Muralitharan, Shoaib Akhtar and Nuwan Kulasekara still to bat for the Asia Lions, the writing was on the wall with two overs to spare.

Kulasekara and Vaas both departed within a few deliveries of each other. Muralitharan came to the crease with two balls to spare, smashing the first for a six, which drew applause from bowler Pietersen, but that only prolonged the  inevitable Giants' celebrations just a little bit longer.