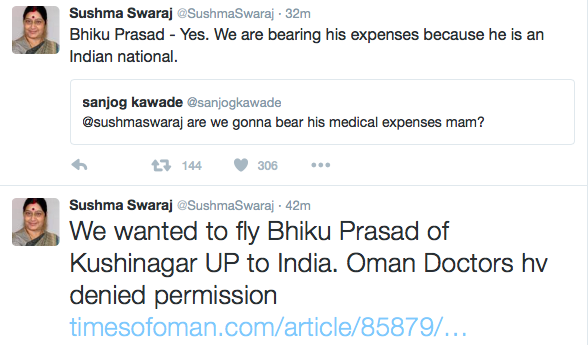 Latest: Undocumented Indian expat worker Bhiku Prasad passes away in Oman
Muscat: Bhiku Prasad’s treatment costs will be paid by the Indian government, India’s External Affairs Minister Sushma Swaraj tweeted on her official twitter handle.
Retweeting Times of Oman’s news report on Bhiku, the minister tweeted that medics in Oman have denied the Indian government permission to fly him back home as he is too ill to be moved.
“We wanted to fly Bhiku Prasad of Kushinagar, Uttar Pradesh in India. Oman doctors have denied permission. We are bearing his expenses because he is an Indian national,” the minister tweeted.
Bhiku, an Indian worker from UP, came to Oman hoping for a new life on a visit visa.
After three months of searching, he got one. However, after joining the company, he collapsed on his third day at work.
As his papers were still being processed, he is currently an ‘undocumented’ worker.
**media[433591]**
Without correct papers, he is also stuck in bureaucratic limbo, with nobody ready to pay his medical bills.
Had he come to Oman through proper channels, his hospital treatment would have been covered.
Times of Oman reported Bhiku’s story on Sunday. On Sunday night, the Indian minister responded to the story and tweeted that if medics permit he will be flown back.
Meanwhile, talking to Times of Oman, a medic at the hospital said that Bhiku is not in a condition to be airlifted.
“He has bleeding in brain. It is impossible to airlift a patient in such condition,” the medic said.
Migrant workers who take jobs through unofficial channels are on their own when they land in trouble.
The Indian government implemented the e-Migrate system in August 2015, to ensure safe migration and welfare of Indian migrant workers.
If a worker uses e-Migrate system, the government of India not only guarantees safe migration but also provides free-of-charge insurance cover to the worker.
However, still, Indians migrate through unofficial channels risking their future.