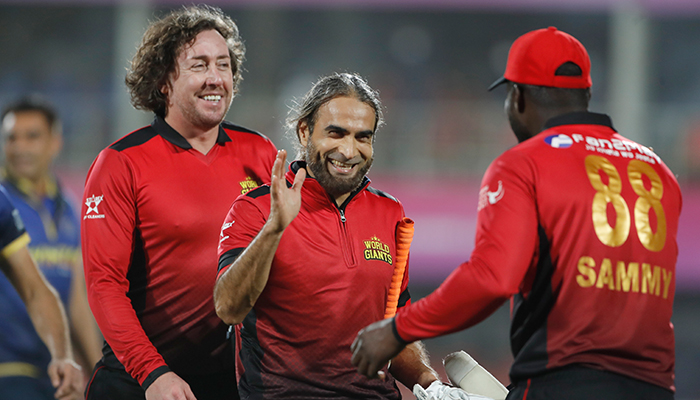 Imran Tahir’s 52 not out won the match for World Giants.

Muscat: India Maharajas lost to the World Giants by three wickets with three balls to spare in the Legends League Cricket match played at the Al Amerat Cricket Ground on Saturday. Naman Ojha's 140 had put the Indian legends in the driver’s seat, but a scintillating batting effort by Imran Tahir won the game for the World XI side.

Morne Morkel and Imran Tahir may have been called tailenders all their lives, but they ensured their team did not bow out without a fight. World Giants needed 12 runs in the last over and Imran Tahir’s 52 not out won the match for them.

In the first ball of the last over of Venugopal, Tahir slammed six and turned down the single on the next ball. He again blasted a six on the third ball over long off, sealing the match for the Giants. World Giants scored 210 for 7 in 19.3 overs beating India Maharajas 209 for 3 (20 overs) by 3 wickets.

Imran Tahir scored 23 runs including two sixes off Gony in the 18th over of the match to bring his team on course to victory.
Munaf, who was once hyped as India's pace sensation, had broken Sammy's stumps when he was on 28 and threatened to cut loose.

Naman Ojha scored 140 off 69 balls and was caught in the deep by Imran Tahir. Yusuf Pathan came into bat in the last over of the match and smashed the last ball for a monstrous six.