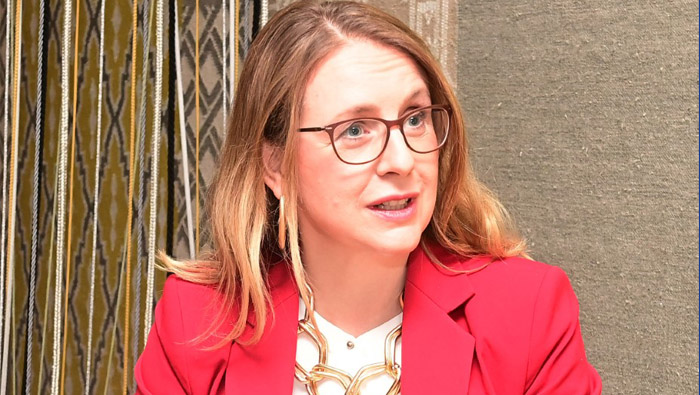 Muscat: Dr. Margarete Schrambock, Federal Minister for Digital and Economic Affairs in Austria expressed her admiration over Oman Vision 2040 and its pillars, which reflect keenness of the Omani government on making the future more brighter for the Omani citizens.

In an interview with Oman News Agency (ONA) and Oman TV, she said that the four main pillars of Oman Visions 2040, “People and Society,” “Economy and Development,” “Governance and Institutional Performance” and “Environment Sustainability”, constitute a comprehensive roadmap for the future.

She pointed out that her country has a similar vision, Austria 2040, which comes almost in line with the Omani visions, particularly in the theme of Environment.

As for the bilateral relations, the Austrian Minister affirmed that these relations are deep and long lasting. She pointed out that the relations are growing particularly after the reopening of the Austrian Embassy in Muscat two years ago. “We are focusing now in setting up new projects in the economic areas that would contribute to augmenting the volume of trade exchange between Oman and Austria,” said the Minister.

She explained that her visit to Oman aimed at promoting the bilateral relations and cooperation towards wider horizons, noting that she discussed with the Omanis side various topics of mutual interest, such as cooperation in renewable energy and green hydrogen technologies.

In this context she said, “Despite the challenges posed by the Covid-19 pandemic, Oman and Austria were determined to promote their relations. There are many promising sectors in which we can cooperate. Austria needs green energy and it looks for new resources and partners. We have discussed with the Omani side the possibility of signing a memorandum of understanding in this field”.

As for the National Programme of Digital Economy, which was approved by the Council of Ministers last October, the Austrian Minister said: “I am very pleased that the digital economy tops the priorities of the Omani government. This field is the key for a prosperous economic future and we look forward to cooperating with Oman in this area to adopt the best practices.”

She further added that during her visit, she presented the Austrian experience in honing skills of students in school and then in university to prepare them for the labour market.

Austria adopts a dual-learning system, said the minister, pointing out that this system enables students to study a particular subject and at the same time they work at a specialized company to sharpen their skills in that profession.

She touched on the field of artificial intelligence. She said, “My country has devised a strategy in this field with the participation of many companies and institutions. This strategy is on the process of implementation and we are keen to present it for the Omani side so we can cooperate in this important area.”

The Austrian Federal Minister for Digital and Economic Affairs pointed out that the two sides has agreed to devise a mechanism to boost the bilateral relations between Oman and Austria. This mechanism, she said, will be through the formation of specialised working groups and intensifying joint visits and communication between officials of the two countries.

The volume of trade exchange between the Sultanate of Oman and the Republic of Austria amounted to about OMR75 million. As many as 31 Austrian companies have investments in Oman in many fields.