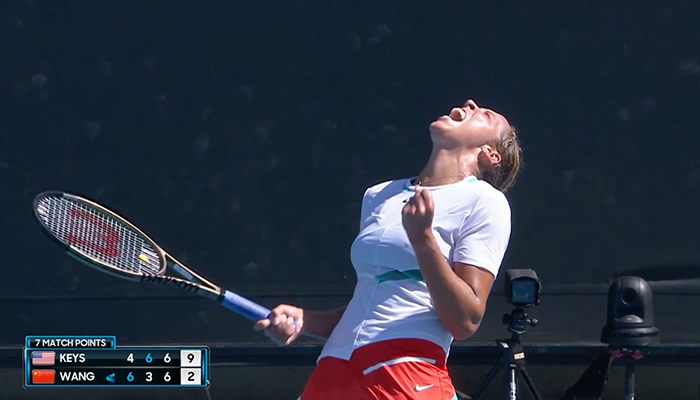 Perfect tiebreak from Madison Keys. She wins it 10-2 to advance to the fourth round.

Melbourne: The fourth day of the Australian Open 2022 turned out to be an eventful day as reigning US Open Champion Daniil Medvedev beat Nick Kyrgios in a hard fought four set encounter while Simona Halep registered a comfortable straight sets win over Beatriz Haddad Maia.

Aryna Sabalenka too won a hard fought match here at the Rod Laver Arena. On the other hand Emma Raducanu and Garbine Muguruza faced 2nd round exit.

The first set went to a tie-breaker where the Russian made held nerve to take a one set lead. In the second set the US Open champion broke the Aussie in the tenth game to pocket the second set.

An inspired Kyrgios forced a break of serve in the third set to take the match into the fourth set but Medvedev clawed his way back to regain control. The fourth set was a one-sided affair with Kyrgios proving to be no match. Medvedev will face 57th-ranked Botic van de Zandschulp in the third round.

Two-time grand slam champion Simona Halep hardly broke a sweat enroute to the 6-2, 6-0 victory against Brazil's Beatriz Haddad Maia.
World no.2 Aryna Sabalenka also sailed to the Australian Open third round in women's singles. The Belarusian came from a set behind to beat China's Xinyu Wang 1-6, 6-4, 6-2.

Meanwhile, third seed Garbine Muguruza was stunned by 61st ranked Alize Cornet from France 3-6, 3-6 in a match that lasted for one hour and 27 minutes.

The US Open champion Emma Raducanu making her debut in Melbourne struggled with blisters on her right hand and lost to World no.98 Danka Kovinic from Montenegro 4-6, 6-4, 3-6.

Raducanu raced into a 3-0 lead before taking treatment on her serving hand and ended up losing the opening set 4-6. The 19 year old fought her way back to win the second set 6-4 but was beaten 3-6 by the world no. 98 Kovinic on the Margaret Court Arena.