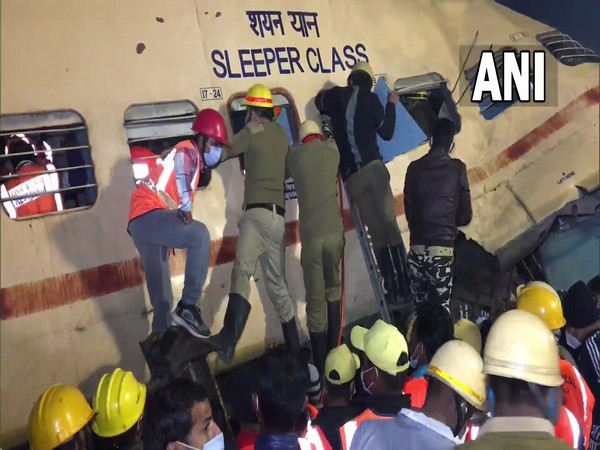 Jalpaiguri: Some passengers are still trapped inside two coaches of the Bikaner-Guwahati Express, which derailed near Jalpaiguri in West Bengal on Thursday, said Inspector General of Police (IGP) North Bengal, DP Singh.

Speaking to ANI, Singh said that so far four people have died and over 40 people are injured of which one is in critical condition. "Passengers are trapped inside two coaches. Rescue ops underway. We have no exact figure on casualties. However, four people died, one is in critical condition and around 40 people are injured," said the IGP North Bengal.

He further said that the District Police and administration has been advised to provide arrangements for stay, transport, refreshments, etc for inbound passengers.

The relief train was started at 9:50 pm from the accident site on Thursday.

"The relief train has started at 9:50 pm from the accident site and would stop at New Alipurduar for food etc. It would stop at Bongaigaon, Barpeta Road, Rangia, Kamakhya and Guwahati Railway Station," Singh had earlier said.

The Prime Minister also earlier today took stock of the situation. He also announced an enhanced amount of ex gratia compensation to the victims of the accident.

Indian Railways announced an ex gratia of Rs 5 lakh for the family members of people who lost their lives in the incident that took place near Domohani (West Bengal), this evening. The injured have been taken to Jalpaigudi District Hospital and New Moinagudi district hospital.

"An ex-gratia amount has also been announced for the affected passengers. A high-level inquiry has also been ordered," she added.

She said that the rescue operation is almost complete and the teams have successfully rescued the affected passengers.