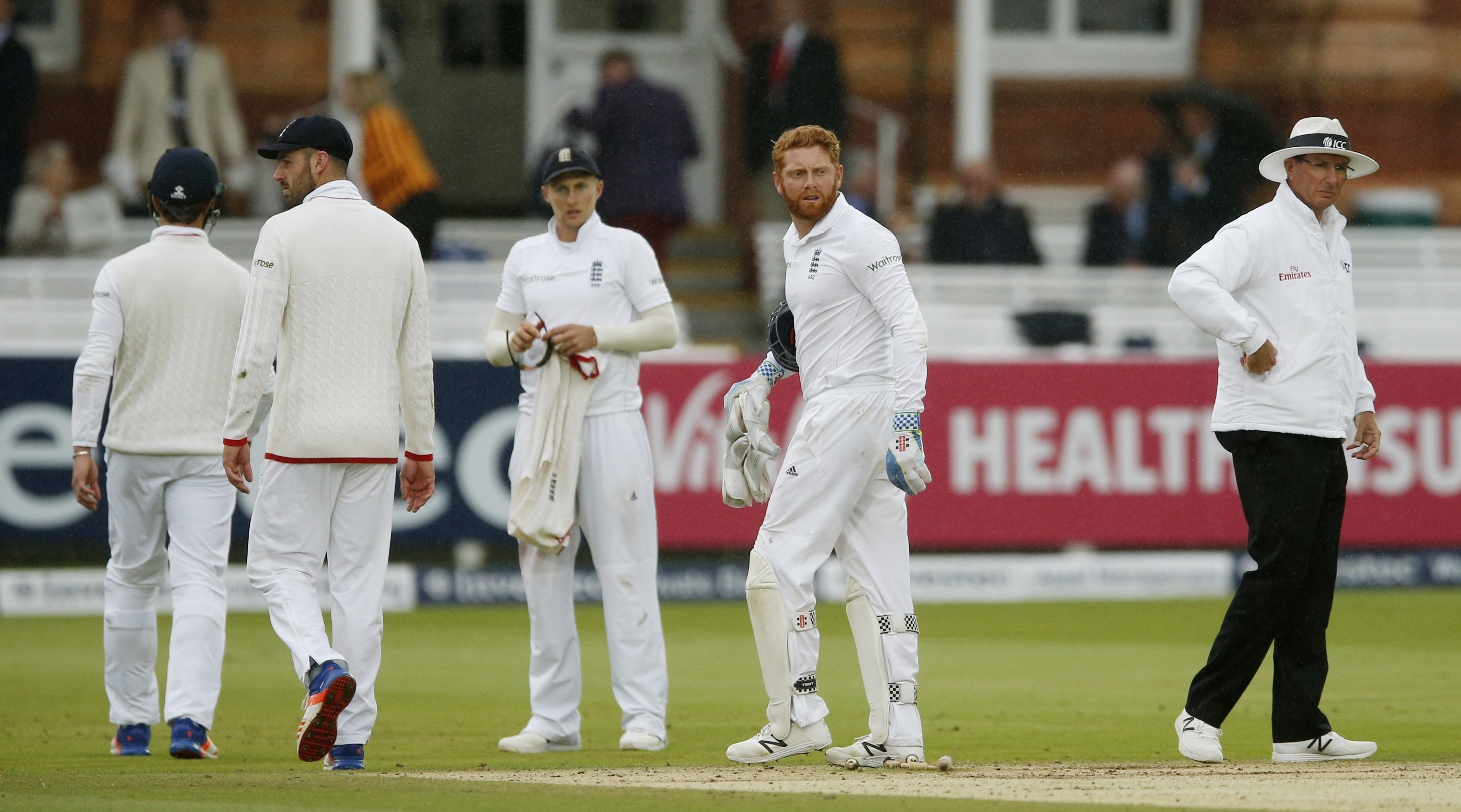 London: The third and final Test between England and Sri Lanka ended in a draw after persistent rain allowed only 12.2 overs of play on the last day at Lord's on Monday.
Sri Lanka, chasing 362 for victory, went from 32 for no wicket to 78 for one between the showers but neither side had any chance of forcing victory and England won the series 2-0.
England fast bowler James Anderson trapped Kaushal Silva lbw for 16 with an excellent inswinging delivery to claim the only wicket.
Dimuth Karunaratne finished unbeaten on 37 with Kusal Mendis on 17.
Mendis hit the last ball of the match by Joe Root for six before the rain returned.
Jonny Bairstow was named man-of-the-match and England's man of the series. Bairstow made a Test-best 167 not out in the first innings at Lord's and in the series as a whole scored 387 runs at an average of 129, including two hundreds.
Bairstow has been in superb batting form since making 150 not out his maiden Test century, against South Africa in Cape Town in January.
The Sri Lanka series also saw wicket-keeper Bairstow hold 19 catches, although doubts about his glovework persisted after he grassed a couple of routine chances.
England won the first Test at Headingley by an innings and 88 runs, before defeating Sri Lanka by nine wickets in the second Test at the Riverside.
Kaushal Silva was Sri Lanka's man-of-the-series.
Silva, who made a stylish 79 in the first innings of this match, said: "I've missed out on a hundred at Lord's three times, hopefully I'll get another chance next time."
Sri Lanka resumed on Monday on 32 without loss. Karunaratne was 19 not out and Silva unbeaten on 12.
In overcast conditions, staying at the crease against the England new-ball duo of Broad and Anderson was going to be a tough task for Sri Lanka, let alone reaching a target that would set a new record for the highest fourth-innings total to win a Test at Lord's, surpassing the West Indies' 344 for one against England in 1984.
Monday's first over saw Silva edge Broad just short of England captain Alastair Cook at first slip. But Anderson, England's all-time leading Test-wicket taker, struck when Silva, padding up after failing to pick an inswinger going against the Lord's slipe, was lbw for 16.
No sooner had Silva been dismissed then the umpires took the players off the field for rain. But the weather relented for play to resume after tea.
New batsman Mendis was fortunate when, trying to evade a Broad bouncer, a top edge sailed over wicket-keeper Jonny Bairstow's head for four.