Broad, Anderson manage to hang on as England walk away with draw 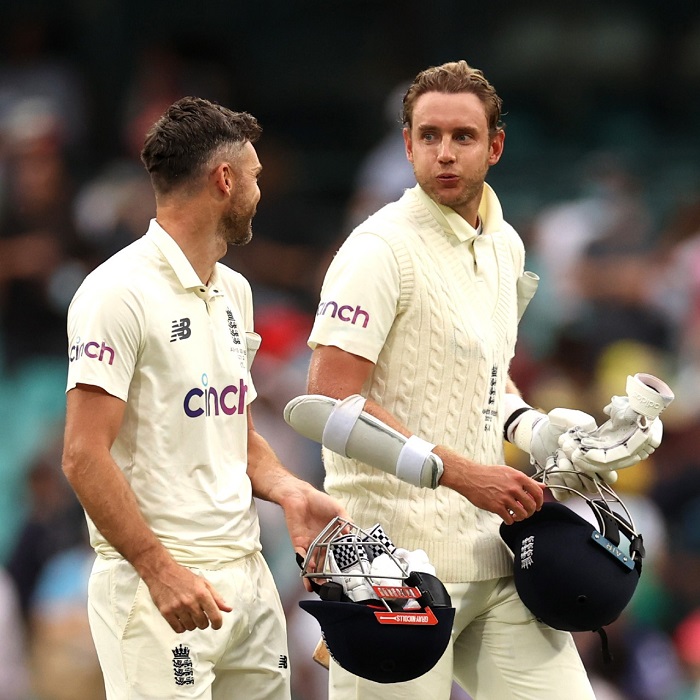 Sydney : Stuart Broad and James Anderson batted out the final two overs on Day 5 as the fourth Ashes Test between Australia and England ended in a draw here at the Sydney Cricket Ground on Sunday.

The five-match series stands 3-0 in favour of Australia and the fifth game will begin on Friday in Hobart and it would be a day-night contest. Resuming the third and final session on Day 5 at 174/4, Ben Stokes and Jonny Bairstow added 19 more runs to the total before Stokes (60) was sent back to the pavilion by Nathan Lyon and this meant England had to see out 27.2 overs on the final day to walk away with a draw.

With 17 overs remaining in the day, skipper Pat Cummins did the job as he had Jos Buttler (11) adjudged leg-before wicket, and the task for England to survive the day got tougher. In the very same over, Cummins got the better of Mark Wood (0) and England was reduced to 218/7.

Bairstow and Jack Leach held off for a while but Scott Boland once again proved his mettle as he had Bairstow (41) dismissed and Australia was just two wickets away from registering a memorable win while England had to bat out 10.2 more overs to walk away with a draw.

With three overs to survive, the light faded and the umpires decided that only spinners could bowl. Steve Smith came into the attack and on the final delivery of the 100th over, he dismissed Jack Leach (26). In the end, Broad and James Anderson batted out 2 overs to help the visitors walk away with a draw. Broad and Anderson remained unbeaten on 8 and 0 respectively.