6 dead, over 20 rescued as rains lash parts of Oman 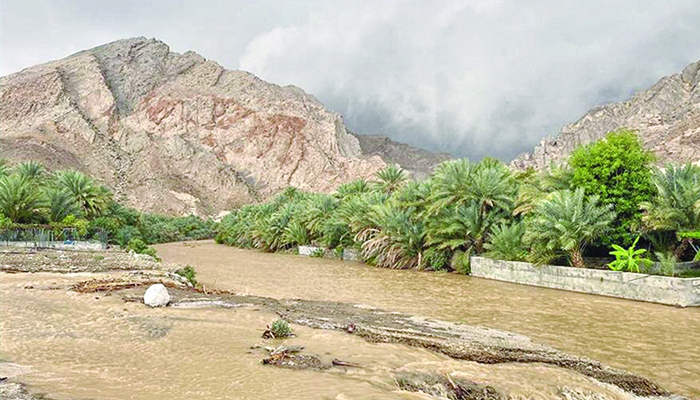 People have been advised to take all the necessary precautions before venturing outside their homes during adverse weather, particularly those who are in areas near wadis and the sea.

Muscat: Six people died, and at least 20 more required rescuing by emergency services, due to the heavy rains lashing Muscat and other parts of Oman.

“Six people have died as a result of the effects of low pressure over some of the governorates of the Sultanate of Oman,” said Captain Munir bin Mohammed Al Sinan of the Royal Oman Police, speaking to Oman TV.

Among the various emergency callouts made to the Civil Defence and Ambulance Authority (CDAA) on 31 December and 1 January were those that requested their assistance to rescue two people from their vehicle, which had gotten caught in the fast-flowing rapids of Wadi Surur in Wilayat Samail, Ad Dakhiliyah.

While the CDAA was able to rescue one of the two people, search and rescue parties combed the area for the second, who was sadly found dead.

While two people were each rescued from Al Jifnain and Rusayl in Muscat, possibly the largest operation in terms of people requiring assistance took place in Nakhal, where 15 people required assistance, one of whom needed extraction when rainwater entered their home.

Similarly, two people were rescued from a wadi near Rustaq, the capital of South Al Batinah. Fortunately, all of those who have been rescued are in good health.

The CDAA has also drawn up a list of recommendations for people to avoid heavy rains and flash flooding.

“Do not venture into flooded wadis, stay away from flowing wadis and low-lying areas, and avoid getting close to their sides,” said the authority in their advisory. “Watch your children and do not allow them to get near any water bodies.

“Switch off any unnecessary electrical switches and stay away from streetlights,” they advised. “Look out for any hanging wires. Avoid leaving your home if you suffer from respiratory conditions such as asthma.”

People are also advised to monitor the latest weather forecasts from official sources. The ongoing low-pressure event is expected to last until 5 January, and is likely to affect Musandam, North and South Al Batinah, Muscat, Buraimi, Dhahirah, Dakhiliyah, and North and South Al Sharqiyah.

During this period, people living in these areas can expect rain occasionally intensifying into thundershowers, as well as flash floods, said the National Multi Hazard Early Warning Centre at the Civil Aviation Authority.

“The weather will be partly cloudy with chances of isolated rain over the rest of Oman’s governorates,” added the CAA. “A moderate sea condition is expected along most of the Sultanate’s coasts, with waves up to heights of two meters, although the sea can turn rough during thunderstorms, with waves rising to a maximum height of three metres.”

People are advised to take all the necessary precautions before venturing outside their homes during adverse weather, particularly those who are in areas near wadis and the sea.