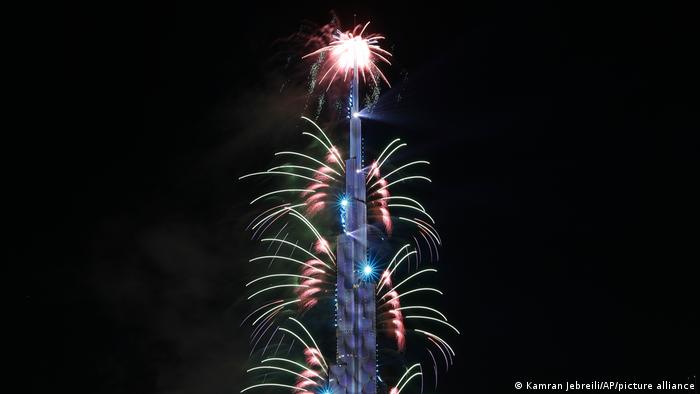 New York: The last day of the year on Friday will herald muted celebrations in some countries due to COVID-related restrictions, while other nations are still pressing ahead with festivities such as fireworks and gatherings.

A year that began with a race to get vaccinated has ended with reluctant Europeans taking to the streets to vent their anger over a possible mandate to get jabbed, while dozens of countries are still short of doses.

In some parts of the world, the festivities are going ahead as normal, whereas others have added restrictions, such as a ban on large gatherings and no fireworks, and some countries have even introduced curfews aimed at preventing large gatherings at midnight.

Thousands of flights were canceled worldwide on Friday, with airlines blaming the disruption on crew shortages amid the coronavirus pandemic.

Americas
New York City has heralded in 2022 as it revived the city's annual event in Times Square, even as public health officials cautioned Friday against unbridled celebrations amid a surge in COVID infections.

The annual ball drop took place as the clock struck midnight. The occasion, usually commemorated with joyous embraces and the uncorking of champagne bottles, was marked with confetti and a limited crowd.

The US' most populous city this year restricted the number of people into Times Square to witness the 6-ton ball encrusted with crystals descend from overhead to just 15,000 people. The number of spectators is far fewer than the many tens of thousands of revelers who usually congregate on the world-famous square for the occasion.

"It's just great when New York shows the entire country how we come back,'' he said. "We showed the entire globe what we're made of. We're unbelievable. This is an unbelievable city and, trust me, we're ready for a major comeback because this is New York.''

In Rio de Janeiro, Brazil, Copacabana beach welcomed a small crowd of a few thousand for 16 minutes of fireworks. This year saw no live concerts like in previous editions.

Oceania
The continent of Oceania was the first to usher in the new year.

The Australian city of Sydney, the customary fireworks display at the Harbor Bridge and Opera House went ahead as planned two hours later.

Despite a surge in coronavirus cases, queues began forming at vantage points around the harbor early Friday in the morning for spectators to get a good view. Vaccination and the use of masks will not be mandatory to attend, organizers said.

Asia
Beijing, Hong Kong, Jakarta and Bangkok have all welcomed in the new year 2022.

President of China Xi Jinping in a New Year's address called on his nation to maintain a "strategic focus" and be mindful of "potential risks" to the Communist Party's long-term goal of transforming China into a global superpower.  Xi also said China had achieved an important step on the way in building a "moderately prosperous" society.

Europe
In Madrid's Puerta del Sol about 7,000 people, half the usual capacity, welcomed the new year by eating grapes, one for each time the clock chimed up to 12.

According to witnesses, shortly after midnight the two men separated from a group of 10 people. Witnesses then heard a loud bang and later found them on the ground seriously injured.

After calling emergency services, the 37-year-old died despite attempts at resuscitation at the scene of the accident. The 39-year-old was taken to hospital with life-threatening injuries.

Police, who think the fireworks may have been home-made, are still investigating the incident.

Germany recently reintroduced contact restrictions, has banned fireworks for the second year in a row in an attempt to prevent large gatherings and to ease the burden on hospitals, which regularly have to treat injuries resulting from pyrotechnic accidents.

A majority of Germans support the ban, according to a YouGov poll carried out for the news agency DPA, but that hasn't stopped some citizens trying to circumvent the restriction by traveling to neighboring Denmark and Poland to stock up on fireworks.