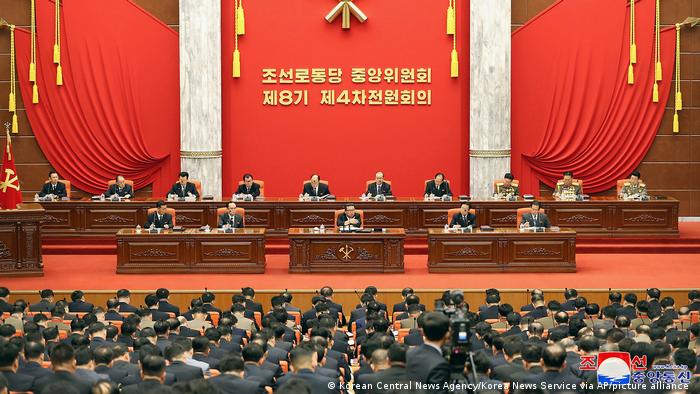 North Korean leader Kim Jong Un has presided over the first day of a high-level meeting of the ruling Workers' Party that is to discuss strategic planning for the coming months, state media reported on Tuesday.

The plenary meeting, one of the highest-level decision-making bodies in the country, opened on Monday amid problems posed by the coronavirus pandemic and a diplomatic deadlock with the United States.

development of socialist construction to the next stage of victory.''

What problems does North Korea face?


North Korea is facing international sanctions over its nuclear weapons program, which has been expanded under Kim during his 10 years at the helm.

The program has brought the country into conflict notably with the US, which has imposed multiple sanctions along with several other countries, the UN and the EU.

Negotiations between North Korea and the US have been at a standstill since a failed meeting between former US Fresident Donald Trump and Kim in Hanoi, Vietnam, in February 2019.

Pyongyang has so far rejected proposals for talks by the Biden administration.

The country's economy contracted by 4.5% in 2020, largely owing to the pandemic, though little is known about the effects of the disease within North Korea itself. It was one of the first countries to lock down its borders when Beijing announced the presence of the new coronavirus.

What happens at the plenary meetings?


Previously, Kim has used the meetings to make announcements related to his stance on the US or South Korea, or on his country's nuclear program.

In January, at such a conference, he called US North Korea's "biggest enemy" and announced he was expanding the regime's nuclear arsenal.

It is not known how long this week's meeting will last. In 2019, a plenary meeting was held for four days.