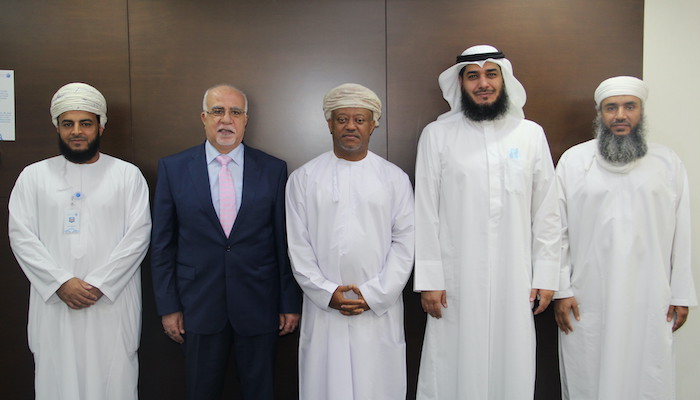 Muscat: Sharia Supervisory Board of Alizz Islamic Bank held its sixth meeting of the year at the main branch of Central Business District at Ruwi headed by His Eminence Sheikh / Prof. Dr Essam Khalaf Al-Anzy.

Members of the Sharia Supervisory Board including Sheikh Dr Ahmed Subhi Ahmed Ayadi, Sheikh Nasser bin Yousef Al Azri, attended the meeting. Sulaiman Al Harthi, Chief Executive Officer and Issa bin Salim Al Riyami, Head of Sharia Audit & Compliance, Chief Internal Auditor, Chief Risk Officer and several other officials were present.
In his presentation, Sulaiman Al Harthi highlighted the performance of the bank during the fourth quarter of the current year and the challenges faced by it. He also focused on the action plan to be pursued by the bank during the forthcoming year.

The meeting discussed several issues of interest including Sharia Audit and Compliance reports during the fourth quarter of 2021 following which the Sharia Supervisory Board suggested appropriate guidelines with regards to the subjects of discussion. Sharia Supervisory Board also approved the audit and training plan for the next year 2022 in addition to numerous meeting agendas which were adequately addressed.

The meeting commended Sheikh Nasser bin Yousef Al Azri, SSB Member, for his valuable contributions to the bank during his nine-year tenure with Alizz Islamic Bank.
The Board of Directors praised the role played by the Sharia Supervisory Board in spreading and promoting awareness about the role of Islamic banking and community initiatives in various media. From time to time, the bank generates and develops innovative ideas to consolidate the experience of Islamic banking and make it a success story. The General Assembly also endorsed the proposal of the BOD to appoint Sheikh Dr Ibrahim Al Sawafi as a member of the board.

The Sharia Supervisory Board at Alizz Islamic Bank reviews and studies all Islamic banking products and services launched by the bank. The board includes in its membership scholars who are distinguished by deep knowledge of Islamic Sharia and the jurisprudence of transactions, as well as to spread reassurance among shareholders and depositors whose trust is undoubtedly one of the most important success factors for the bank.

Islamic banking in Oman is growing rapidly and steadily with an average growth rate of 30.3 per cent between 2013 and 2020. The assets of the Islamic banking sector in the Sultanate reached OMR5 billion and 676 million which is equivalent to $14.1 billion by the end of June 2021 with a market share of 15.3 per cent.

The market share of the Islamic banking sector in the finance and deposits sector was 16.9 per cent and 16.8 per cent, respectively. This growth was substantiated by high-quality assets since the financing default did not exceed 1.93 per cent in December 2020.

Other financial stability indicators have already exceeded the prudential requirements as the average capital adequacy ratio (CAR) hit 15.61 per cent compared to the ratio required by the Central Bank of Oman (CBO) standing at 12.25 per cent. This is in addition to the liquidity coverage ratio (LCR) which were 116 per cent and 119 per cent respectively compared to the prudential requirements of 100 per cent.

During recent years, the Central Bank of Oman has consolidated its partnership with the international institutions and organizations responsible for setting Islamic finance standards. This scenario rendered the bank to become a member of the main committees and working groups branched out of these entities. This partnership enabled the Central Bank of Oman to host the capacity building event, the awareness and training programs and the meetings for policies development organised in the Sultanate of Oman.

It is to be noted that the Central Bank of Oman is currently engaged in developing a new strategy for the development of the Islamic banking sector to achieve sustainable growth and ensure the effective contribution of this sector to the Omani economy in general and banking and financial sectors in particular. This strategy is geared towards the enhancement of the existing regulatory and prudential systems and the consumer protection frameworks; the diversification of products offered by this sector and the enhancement of coordination between all stakeholders.