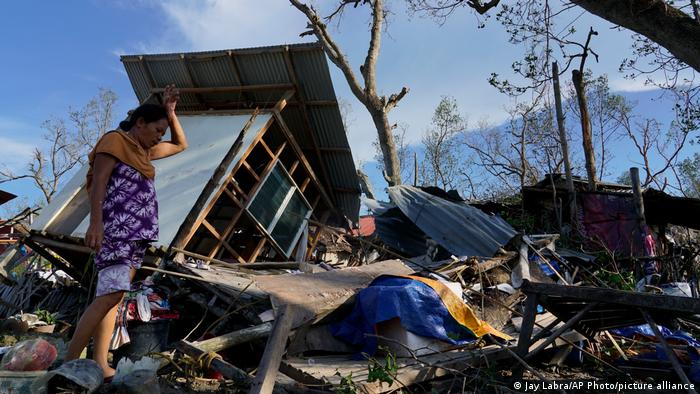 The official death toll from Typhoon Rai, which hit parts of the Philippines in mid-December, was raised from 375 to 388 on Monday, with outbreaks of disease compounding the problems faced by affected residents.

The civil defense office in Manila said 60 people were still missing following the storm, one of the most destructive to hit the country in recent years.

Some 482,000 houses were damaged or destroyed by winds or flooding, leaving hundreds of thousands homeless. Some 300,000 people are reported to be staying in evacuation centers and another 200,000 have found accommodation with relatives or friends, officials said.

In all, the typhoon is estimated to have caused $410 million (€362 million) worth of damage to homes, infrastructure and agriculture.

The Philippines gets hit by an average of 20 cyclones each year. The most deadly on record was Super Typhoon Haiyan, which struck the country in 2013 and left 7,300 people dead or missing.

What do we know about disease outbreaks?


Amid the devastation, several outbreaks of disease have been reported. Eighty people have taken ill with acute gastroenteritis in the southern province of Dinagat Islands, while 54 people are being treated for diarrhea in hospital on the neighboring island of Siargao, said Health Undersecretary Maria Rosario Vergeire.

She said 16 diarrhea cases had been reported from the central city of Cebu.

The illnesses are believed to have spread through contaminated water, Vergeire said.

What is the coronavirus situation?


Vergeire also said the typhoon had spoiled more than 4,000 doses of COVID-19 vaccines and damaged 141 hospitals and clinics, only 30 of which have resumed full operations.

The Philippines was hit by a massive surge in coronavirus infections in September, but the situation had been easing greatly before Typhoon Rai hit on December 16 and 17.