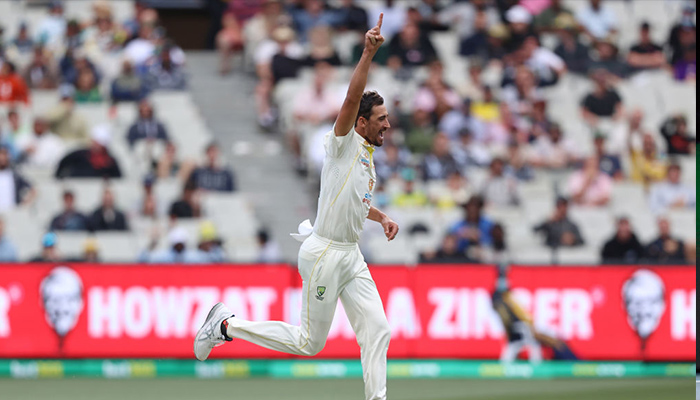 Zak Crawley (5) and Dawid Malan (0) were dismissed by Mitchell Starc.

Melbourne : England bowlers displayed a spirited performance to help their side remain in the contest but the batting once again disappointed against Australia on Day 2 of the ongoing third Ashes Test here at the Melbourne Cricket Ground on Monday.

At stumps, England's score read 31/4-- trailing by 51 runs. Joe Root (12*) and Ben Stokes (2*) are unbeaten at the crease. Trailing by 82, England batting struggles continued once again as Zak Crawley (5) and Dawid Malan (0) were dismissed by Mitchell Starc. Haseeb Hameed (7) failed to stay at the crease for a long time and he was sent back to the pavilion by Scott Boland.

Nightwatchman Jack Leach (0) was clean bowled by Bowland in the same over and England was left reeling at 22/4. In the end, Root and Stokes ensured that the visitors do not lose any more wickets before stumps on Day 2.

Earlier, resuming the third and final session at 200/6, Australia was given a blow straight away as Cameron Green (17) was sent back to the pavilion by Jack Leach with Australia's lead at 22.

Soon after, Alex Carey (19) was sent back to the pavilion by Ben Stokes and Australia was in danger of being bowled out cheaply. Skipper Pat Cummins and Mitchell Starc then put on 34 runs for the ninth wicket, extending Australia's lead past the 50-run mark.

James Anderson then got his fourth wicket of the day as he dismissed Cummins (21), reducing Australia to 253/9 in the 85th over. In the end, England got bowled out for 267 and the lead was 82.