SAI participates in key forum of UN convention against corruption 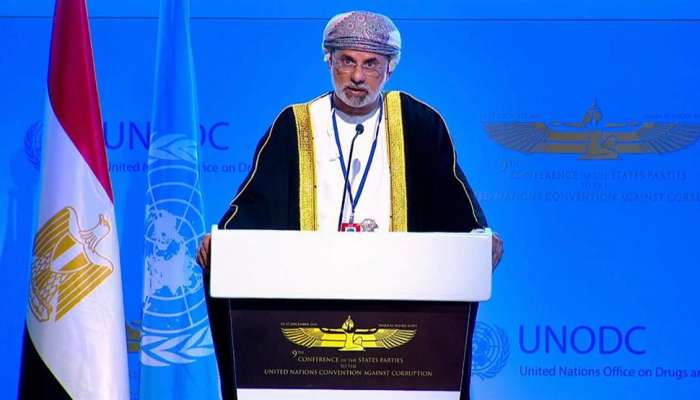 Cairo: The Sultanate of Oman, represented by the State Audit Institution (SAI), is currently taking part in the 9th session of the Conference of the States Parties to the United Nations Convention Against Corruption.

This session of the conference is hosted by the Arab Republic of Egypt represented in its Administrative Control Authority.

The Sultanate of Oman's delegation in the 5-day conference is headed by Sheikh Nasser Hilal Al Ma'awali, Chairman of SAI.

In his speech at the opening of the conference, Dr. Mostafa Madbouly, Prime Minister of the Arab Republic of Egypt welcomed the participating delegations and praised the developmental role played by the authorities concerned with promoting integrity, protecting public money and combating corruption.

He stressed the importance of the conference in discussing and reviewing the convention in order to exchange experiences and effectively achieve its goals.

He further noted that combating corruption requires active participation at the institutional, societal and international levels.

Sheikh Nasser delivered the Sultanate of Oman’s speech at the conference, in which he affirmed that Oman, through SAI and all institutions concerned, is keen to enforcing law and taking all measures to ensure protecting public money and enhance the efficiency of its utilisation.

He added that Oman, since its accession to the United Nations Convention against Corruption in 2013 under Royal Decree 64/2013, has strived to implement the terms of the convention through measures that ensure promoting integrity and combating corruption.

SAI Chairman also underlined the keenness of Oman to actively participate with the international community in the areas of promoting integrity and combating corruption.

The conference's programme includes many topics, most notably: a review of the implementation of the United Nations Convention Against Corruption, the measures taken by the states parties to implement the convention, and the difficulties they face in addressing the convention, among other relevant topics.

On the sidelines of the conference, Sheikh Nasser Hilal Al Ma'awali, Chairman of SAI, met with a number of heads of counterpart authorities in the GCC states, as well as Arab and foreign countries.

They reviewed topics related to auditing aspects and areas of enhancing integrity and combating corruption, besides the existing aspects of cooperation and means to enhance them in a way that serves common interests.