Karl Nehammer sworn in as new chancellor of Austria 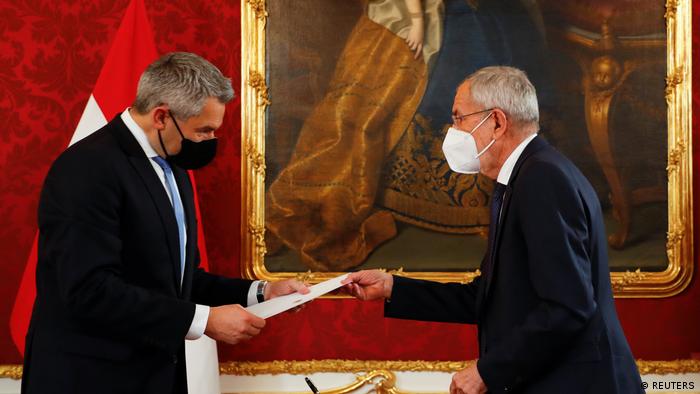 Karl Nehammer was sworn in as Austrian chancellor by President Alexander Van der Bellen on Monday in a ceremony in Vienna's Hofburg Palace as the country's third leader in three months.

He now faces the task of trying to free the coalition government from the taint of months of political turmoil and scandal and of creating conditions conducive to lifting the country's coronavirus lockdown.

Why is Nehammer taking power?

Kurz's resignation as party leader and declared departure from politics also came on Thursday. Previously, he had stepped down as chancellor in October amid a corruption scandal that saw his offices searched in a police investigation.

As reasons for his now abandoning the political stage altogether, Kurz, 35, said he wanted to spend more time with his partner and newborn son.

However, his political career has been dogged by scandal in the past few years since he became the youngest democratically-elected head of government in the world in 2017.

A first coalition government with the far-right Freedom Party (FPÖ) collapsed in 2019 in a corruption affair. Kurz then won early elections, forming a coalition with the Greens.

However, in October he faced allegations that public money was used to ensure positive coverage in a tabloid newspaper. He has denied any wrongdoing.


The Vienna-born Nehammer worked in the army for several years. He then started working as a communications adviser before becoming a politician in 2017.

He was made interior minister in January 2020. While he was in office, Austria experienced its first Islamist terrorist attack, in which four people were killed last November.

Nehammer supported Kurz in taking a hard-line anti-immigration stance and is likely to continue with a harsh refugee policy.

He has already carried out a Cabinet reshuffle, with the selected ministers being sworn in along with him. Among other things, he has returned Schallenberg back to his previous post as foreign minister and appointed new finance, interior and education ministers.