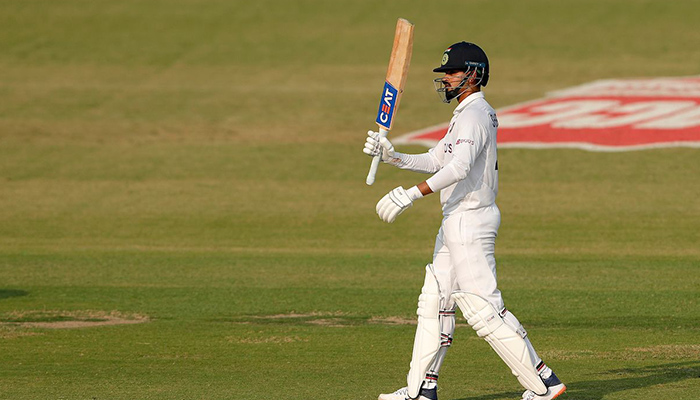 Shreyas continued his fine form and brought up his maiden Test ton.

Kanpur : India batter Shreyas Iyer on Friday scored his maiden Test century in his debut game in the longest format on Day two of the ongoing opening match against New Zealand.

Shreyas was at 75 when stumps were called on Thursday as India ended day one of the first Test at 258/4. The right-handed batter walked in confidently and smashed two boundaries in Kyle Jamieson's first over here at Green Park, Kanpur on Friday. Shreyas then continued his fine form and brought up his maiden Test ton.

"A debut to remember for @ShreyasIyer15 as he brings up his maiden Test century," BCCI tweeted.
On Thursday, Shreyas received his Test cap from former skipper and legendary cricketer Sunil Gavaskar ahead of the first match against New Zealand.

Meanwhile, India lost Ravindra Jadeja in the first session on Day Two on Friday with the hosts reaching the score of 300 in the first innings.
Earlier on Day One, Shreyas and Ravindra Jadeja registered half-centuries as India dominated on Thursday.
India ended Day One at 258/4 after being down to 154/4 in the second session.

In the third and final session of Day One on Thursday, Shreyas and Jadeja ensured that India do not lose any more wickets before the close of play.