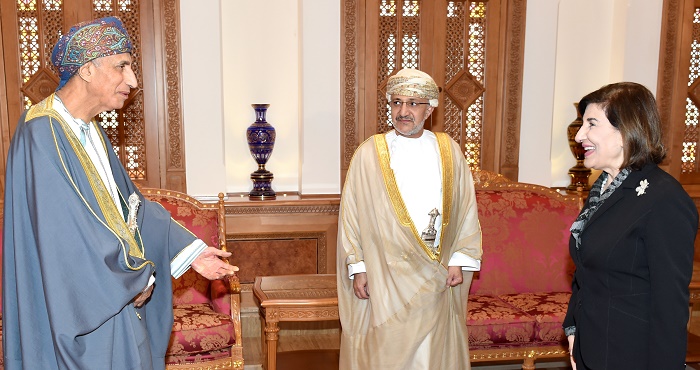 The meeting touched on cooperation between Oman and Syria, with emphasis on the conservation of heritage and the consolidation of intra-Arab relations.

HH Sayyid Fahd expressed his best wishes for the Syrian leadership and the Syrian people further progress and growth.

He affirmed that “The Sultanate of Oman accords full attention to heritage—being the nation’s historical memory, so that upcoming generations could consult and benefit from this civilizational reservoir on a regular basis”.

The meeting touched on cooperation between Oman and Syria, with emphasis on the conservation of heritage and the consolidation of intra-Arab relations. The two sides also reviewed major developments in the regional and international arenas.

Dr. Bouthaina Shaaban expressed her delight at visiting the Sultanate of Oman. She commended the progress Oman made in different fields, notably the Omani experience in management of national records and archives and its keenness on promoting historical studies.

She also valued her talks with Omani officials, noting that the outcome would reflect positively on bilateral cooperation.

The meeting was attended by Salim Mohammed Al Mahrouqi, Minister of Heritage and Tourism, Dr. Hamad Mohammed Al Dhoyani, Chairman of the National Records and Archives Authority, and Dr. Bassam Al Khateeb, Ambassador of the Syrian Arab Republic to the Sultanate of Oman.