Strengthening bonds of friendship by commemorating National Day of Oman 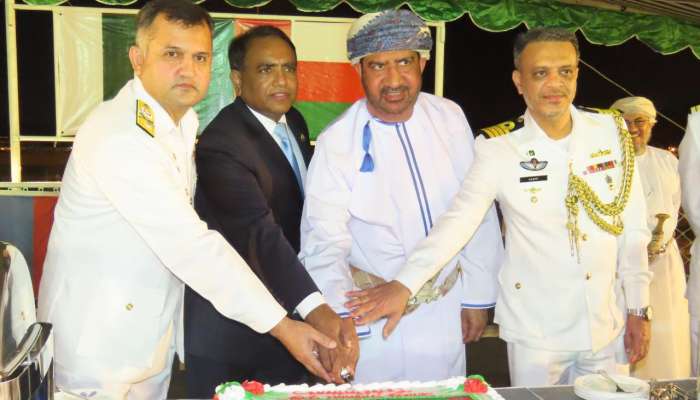 The purpose of this goodwill visit was to commemorate the 51st National Day of Oman falling on 18th November 2021. The goodwill mission was led by Commodore, Commander 10th Patrol Craft Squadron (COMPATRON-10) as Mission Commander. On 17th November 2021, the Mission Commander and Commanding Officers called on Director General Operations and Plans at the headquarters of the Royal Navy of Oman. During the call on, matters concerning mutual interests and cooperation between RNO and PN were discussed.

Officers and men from Royal Navy of Oman visited PN ships for professional briefings and interaction.  In the evening of 17th November, 2021, a reception was hosted onboard Pakistan Navy Ship Behr Masah (while abiding by the SOPs and instructions issued by Supreme Committee dealing with COVID-19) which was attended by members of Majlis Al Shura, Majlis-e- Daula, local dignitaries, diplomats including ambassadors and military attaches of various countries, senior officers from RNO, RAO, RFAO and prominent Pakistani community members.

In order to pay tribute to Oman, Dr. Said Muhammad Al Saqlawi, Member Majlis-e-Daula  was invited as the chief guest who along with Ambassador of Pakistan cut the cake.  The Ambassador of Pakistan in his remarks paid rich tribute to Late His Majesty Sultan Qaboos  bin Said Bin Taimour who played an exemplary role in transforming Oman as highly developed and progressive country.

The Ambassador also conveyed greetings to His Majesty Sultan Haitham Bin Tarik on the auspicious occasion of 51st National Day of Oman on behalf of the President, Prime Minister and brotherly people of Pakistan and wished continued progress and development under the sagacious and wise leadership of HM.

The visit by Pakistan Navy ships is aimed at strengthening the bonds of friendship between Oman and Pakistan in general and Royal Navy of Oman and Pakistan Navy in particular as well as exploring new vistas for future collaborative initiatives between the two countries. The goodwill visit will surely contribute towards improving interoperability and learning from each other experiences on maritime operations.