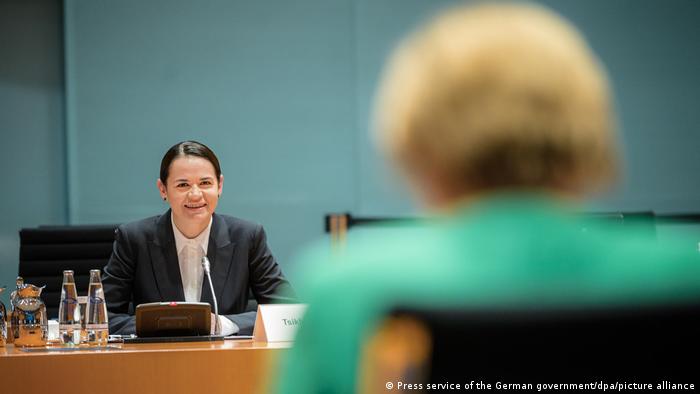 Last week Lukashenko and Merkel spoke by phone twice, discussing the crisis on the border with Poland and agreeing to maintain contact, but Tsikhanouskaya took a dim view of the interaction.

"From the side of the Belarusian people, it looked very strange," Tsikhanouskaya said in Vienna after attending a conference on Belarusian civil society.

Though the opposition leader did concede that she understood why Merkel engaged with Lukashenko, in order to "deescalate the situation at the borders," Tsikhanouskaya said Lukashenko should not be legitimized through diplomatic dialogue.

Tsikhanouskaya said that EU leaders should "refrain from any contacts" with Lukashenko.

Later on Monday, Merkel spoke with Tsikhanouskaya in a telephone call, where Merkel reiterated her support for the democratic process during the political crisis in Belarus.

"The chancellor underlined the continued support of the federal government for the Belarusian democracy movement," government spokesperson Steffen Seibert said.

He said Merkel "stressed" that Lukashenko's government "must end the repression against the opposition and independent journalists, release prisoners, and enter into a serious dialogue with society in order to resolve the crisis through fair and free elections."


Shortly after last week's phone call, the German government released a statement confirming that communication between Merkel and Lukashenko had taken place about "the difficult situation on the border between Belarus and the European Union — especially about the need for humanitarian aid for the refugees and migrants there," though the statement did not refer to Lukashenko as the president of Belarus.

The dialogue between Merkel and Lukashenko is the first time a Western leader has spoken with the Belarusian strongman since the contested 2020 presidential elections, the outcome of which has been widely disputed in the West.

Maas describes the Belarus situation as 'worse than ever'

"The domestic situation in Belarus is worse than ever," Maas said, adding that the exiled opposition must now remain united.

Pressure on Lukashenko must be maintained, Maas said, referring to the European Union's fifth package of sanctions on Belarus, which is still being drafted.

There were mass protests last year in the wake of the presidential election. Protesters vented their frustration over the result, which the Belarusian electoral commission declared was won by Lukashenko with 80% of the vote.

But protesters were met with a violent response from authorities. Thousands were beaten by police, and more than 35,000 people were arrested.

The EU also blames Lukashenko for the massing of Middle Eastern refugees on the European Union's external border as retaliation for sanctions on Minsk and for refusing to recognize the strongman as the legitimate leader of Belarus.


On Sunday, Polish Prime Minister Mateusz Morawiecki accused Lukashenko of launching "a hybrid war against the EU" that amounted to the "greatest attempt to destabilize Europe in 30 years."

Morawiecki slammed Belarus' efforts to use migrants as "weapons" against the bloc and said Minsk had the "support" of Russian President Vladimir Putin.

About 2,000 people who are hoping to reach the European Union are stranded in Belarus.

The West accuses Minsk of engineering the crisis as revenge for sanctions slapped on Lukashenko's regime after its brutal suppression of protests against his rule.