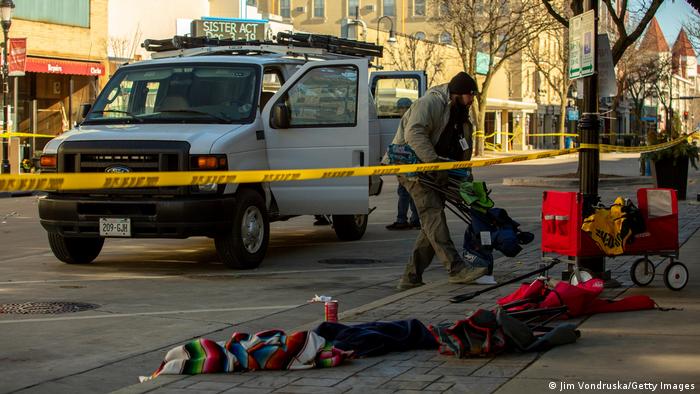 "This was not a terrorist event," said Waukesha Police Chief Daniel Thompson on Monday, one day after an SUV rammed into bystanders and participants at a Christmas parade in the Milwaukee suburb.

"We are confident he acted alone," Thompson added, referencing the driver and prime suspect in the case.

More details emerge on the case


Thompson dispelled rumors that there had been a vehicular pursuit by officers prior to the attack.

Authorities do not believe the attacker knew anyone at the parade.

He named the suspect that authorities apprehended on Sunday as 39-year-old Darrell Brooks Jr and said he would be charged with intentional homicide.

Brooks was known to police over a slew of assault and endangerment charges, including one previous incident where a woman said he had tried to run her over in a gas station.

Local press reported that he had been released from prison on bail for other charges on Friday. Police Chief Thompson further elaborated that Brooks had been part of a domestic disturbance just minutes before he drove into the Christmas parade.


Before providing new details into the case, a clearly emotional Thompson read out of the names of the deceased victims and praised first responders and the community for coming together in a time of crisis.

At least five people were killed and more than 48 hurt in the tragedy Sunday. Doctors said 18 patients between the ages of 3 and 16 were taken to Children's Wisconsin Hospital — among them three sets of siblings.

Six of the children remain in the hospital in critical condition, officials confirmed on Monday.

"This is unique and truly demonstrates the devastating effects of this on our community,'' said Dr. Michael Meyer, head of the hospital's pediatric intensive care unit.

Three of those who died were from the Milwaukee Dancing Grannies. The group said it on its Facebook page it was dedicated to "putting smiles on faces of all ages, filling them with joy and happiness."

Waukesha struggles to return to normality


At the crime scene, emergency workers had cleared up most of the debris and the roads around the area were re-opened.

There was an outpouring of sympathy across the US for those in Waukesha, including from President Joe Biden, who said he and his family were "praying for those suffering."

The parade is an annual event attended by community groups and local residents on the Sunday before Thanksgiving. This year's event, the 59th, was titled "Comfort and Joy."