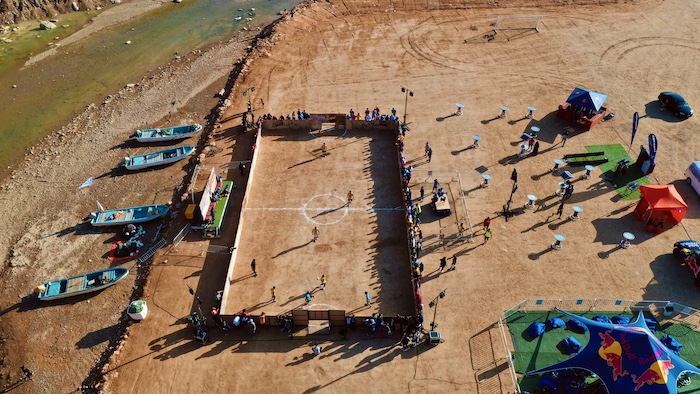 The Red Bull Neymar Jr’s Five tournament came to a close on November 12, 2021 at the breathtaking Yankit location, with Ruwi Team triumphing over Samba with a total of 1-0. Held in partnership with Red Bull Mobile Oman and talabat Oman and had 16 teams competing against each other, the riveting national finals saw player Majid Al Wahaibi score the winning goal that sent audiences into a frenzy, securing his team’s well-deserved spot at the World Finals in Qatar.

During the highly competitive finals, Ruwi Team gave the crowd even more cause for commotion by defeating teams Nakhal and Ruwi Club at the semifinals, scoring totals of 3-1 and 5-1 respectively. The team had previously almost snagged first place in the 2019 Red Bull Neymar Jr’s Five, but lost against Family Team, coming in second. After that, vowed to Ruwi Team train long and hard to ensure a glorious win in the next tournament.

As for that win, which indeed came after a two-year COVID-imposed pause, team coach Mohamed Al Wahaibi fervently thanked the organizers for the tournament, saying: “We eagerly wait for this event and make it a point to participate every year. We have trained all year to win, with two qualifying teams, Ruwi Team and Ruwi Club. We thank Red Bull Neymar Jr’s Five for this opportunity and we can’t wait to go to Qatar, represent Oman and become the crowning international champions.”

Red Bull Neymar Jr’s Five is the largest international tournament for five-player football teams and is fast-paced, tactical, and fun. Each team consists of five players and two reserves. During a 10-minute match, two five-player teams compete without a goalkeeper. When one team scores a goal, the other loses a player, and the match ends when one team loses all players or depending on the results at the buzzer.

Every year the tournament brings together men and women from around the world in exceptional sporting matches, and this year, it’s no different as it’s back to give tens of thousands of football fans on six continents the chance to flex their football skills in an exciting and spirited setting. And no one will enjoy it more than the football-passionate Sultanate of Oman!