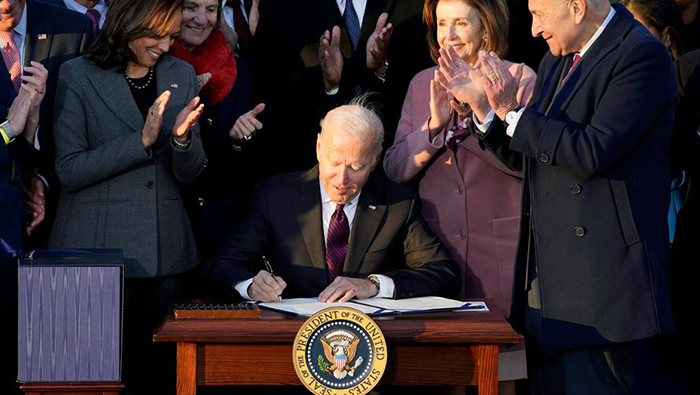 White House: US President Joe Biden signed a $1 trillion infrastructure bill into law Monday in a ceremony at the White House.

It is the biggest infrastructure investment in the US in well over half a century. It also marked a pivot in Washington as the bill was a rare bipartisan achievement.

"We've heard countless speeches," Biden said speaking on the South Lawn, "but today we're finally getting this done."
What is in Biden's infrastructure bill?

It represents the most significant infrastructure investment in the United States since the federal network of highways under the Eisenhower administration in the 1950s, according to the Biden administration.

However, the final version of Biden's infrastructure plan was a streamlined version of a larger vision.

"Too often in Washington," Biden noted, "the reason we don't get things done is because we insist on getting everything we want.''

He added: "I ran for president because the only way to move our country forward is through compromise and consensus.''

In the days ahead, Biden will take to the road to sell his infrastructure plan beyond the beltway. This week he will visit a bridge on New Hampshire's "red list" for repair, a General Motors' electric vehicle assembly plant in Detroit, and other officials will make similar visits nationwide.

A brass band played during Monday's celebration on the South Lawn. Ohio Senator Rob Portman who helped negotiate the deal was on hand to laud Biden for making the accommodations that would bring Republicans on board.

"The approach from the center out should be the norm, not the exception," Portman said.

The event was a divergent scene from the months of tense and often stalled negotiations.

Speakers Monday said the bill would create jobs, combat inflation, and respond to the needs of voters.