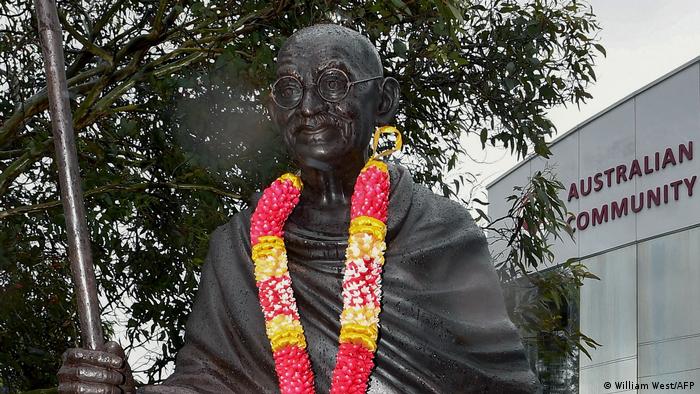 A newly unveiled statue of Mahatma Gandhi in the Melbourne suburb of Rowville was vandalized by Saturday evening, one day after Australian Prime Minister Scott Morrison was present for its unveiling.

Australian police appealed for witnesses on Sunday after unknown assailants attempted to decapitate a statue of Mahatma Gandhi.

The life-sized bronze statue was unveiled by Prime Minister Scott Morrison at the Australian Indian Community Center in the Melbourne suburb of Rowville just one day earlier.

Gandhi is widely credited as the leader who steered India along a path of non-violence towards independence from British rule in 1947.

"An unknown number of offenders have used a power tool to damage the bronze statue," a Victoria state police spokesperson said, adding that detectives were investigating.

Prime Minister Morrison said he was devastated to learn of the vandalism.

"Australia is the most successful multicultural and immigration nation in the world and attacks on cultural monuments will not be tolerated," Morrison said, adding, "It is disgraceful and extremely disappointing to see this level of disrespect."

Federal Education Minister Alan Tudge, Victoria Opposition Leader Matthew Guy and Consulate General of India Raj Kumar were among those who took part in the unveiling Friday alongside Morrison.