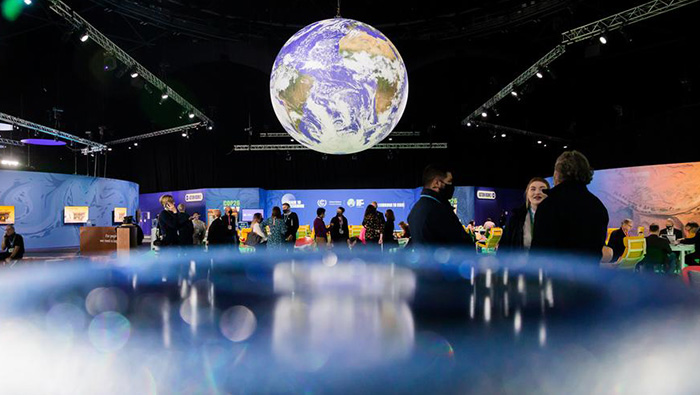 Glasgow: At first, negotiators at the COP26 climate talks in Glasgow wanted a faster phase-out of coal and fossil fuel subsidies.

Then they pushed for ending "unabated" coal burning and "inefficient" subsidies. A third draft suggested accelerating "efforts toward" their phase-out.

By the time diplomats hammered out a text they could all agree to, the term was downgraded to a "phase-down" the use of unabated coal.

The result of that semantic spat — watered down to levels well below what scientists say is needed to halt global warming to 1.5 degrees Celsius (2.7 degrees Fahrenheit) above pre-industrial temperatures — was among the hardest-fought outcomes of two weeks of international negotiations to stop the planet hurtling closer towards catastrophic changes in the climate.

But like many of the decisions coming out of the COP26 climate summit, the final agreement has been widely slammed as weak and ineffective.

Diplomats at COP26 agreed on Saturday evening to do more to fight climate change and help vulnerable countries. Working a full day past the scheduled end of the conference, negotiators thrashed out an agreement to submit better plans next year to cut their emissions in 2030, finalised rules about trading emissions on carbon markets, and promised faster reductions in coal use and fossil fuel subsidies.

But the final document avoided uncomfortable questions about who should pay and how much.

Campaigners and analysts slammed the Glasgow Climate Pact for failing to make rich polluters pay reparations for losses and damages brought about by extreme weather events that climate change has turbocharged.

Rich countries now plan to pay poorer ones $100 billion a year to green their economies and adapt to the effects of climate change by 2023, despite having promised and failed to do so by 2020. With international studies showing the costs of climate change running into the trillions, the sum of money is not enough to cover the costs of the transition and includes loans for which they will have to pay interest.

"It is hard to trust," said Andrea Meza, environment and energy minister of Costa Rica. "But at the end, we need to continue pushing."

The conference is the first time a UN climate summit has formally named the cause of global warming and agreed to burn less coal.

But China and India, the world's biggest and third-biggest carbon polluters, respectively, as well as the globe's top two coal-burning nations, pushed at the last minute to weaken a line about accelerating the coal phase-out in a move that angered vulnerable countries on the frontlines of climate change. Rather than a phase-out of coal, India and China called for its use to be "phased-down."

"We accept this change with the greatest reluctance," said Tina Stege, climate envoy for the Marshall Islands, which is being steadily submerged by rising sea levels. Fighting back tears, COP26 President Alok Sharma apologised for the compromise before banging his gavel to adopt the pact.

Coal was a sticking point during the summit as groups of countries pledged to phase it out, and some banks agreed to cut financing for it, while several countries have fought to keep any mention of coal out of the agreement. Despite the weakened language in the final text, campaigners hailed it as a step towards ending the use of the dirtiest source of energy.

"There's been a very clear signal out of this meeting that coal is one its way out," said Greenpeace executive director Jennifer Morgan.

For decades, scientists have rung alarm bells that burning fossil fuels releases gases that act like a greenhouse and heat the planet. At a previous UN climate summit in 2015 in Paris, world leaders agreed to keep global warming to well below 2 degrees C, and ideally 1.5 degrees C, but they have failed to pursue policies that would achieve that goal, the UN reported. Temperatures are on track to rise between 2.4 degrees C and 2.7 degrees C by the end of the century even if world leaders meet their promises for 2030.

That would spell a world of increasingly intolerable heat waves, droughts, coastal floods and tropical cyclones. The difference between 1.5 degrees C and 2 degrees C, Maldives Environment Minister Aminath Shauna told negotiators in the plenary room shortly before the final text was adopted, is one of "life or death."

The UK government, which hosted the summit, had set a goal for the conference of keeping the lower temperature target alive. After the deal was struck, COP26 President Sharma said: "I think we can say with credibility that we have kept 1.5 within reach, but its pulse is weak."

"Even with all the new Glasgow proposals, emissions in 2030 are still almost double what they should be for 1.5 C," said Niklas Höhne, a climate scientist at NewClimate Institute, a think tank in Germany. "Glasgow resuscitated 1.5 C, but it is still in intensive care."

"It's not a good outcome that could be better. It's a bad outcome that could have been worse," said Nathan Thanki from the Global Campaign to Demand Climate Justice, criticizing positive spin from non-profit organizations in rich countries that were celebrating small steps. "It's sickening. I can't believe more people don't call it out."

The two-week conference started with announcements from big countries like Nigeria and India to cut emissions to net-zero — meaning they pollute the atmosphere with as much greenhouse gas as they suck back out — by 2060 and 2070, respectively.

In a flurry of announcements, some groups of countries also agreed to phase out coal, burn less methane, cut down fewer trees and get rid of cars that burn fossil fuels. The UK government statements on the impact of these pledges were panned by activistsover the course of the summit.

"This summit has been a bunch of lies and greenwashing,and it physically hurts me to think of it," said Mitzi Jonelle Tan, a climate activist with the Fridays for Future movement from the Philippines, in tears. "I am so sad and angry and honestly terrified."

Taken together, deals on methane, coal, cars and trees bring countries 9% closer to what is needed to honor their temperature targets. Including updated plans to slash emissions, the gap between what countries promised under the Paris Agreement and what's required to make those promises reality closes by 25%, according to analysis from Climate Action Tracker (CAT), a research project from NewClimate Institute and Climate Analytics, another environmental non-profit.

But the final document also saw breakthroughs on technical details about implementing the Paris Agreement on climate change. This includes the way countries report their emissions and trade them across borders in global carbon markets, though the rules are "far from perfect" and still contain loopholes, according to Tom Evans, policy advisor at climate think tank E3G.

"If exploited, they could seriously undermine efforts to reduce emissions," he said.

The concentration of CO2 in the atmosphere has continued to rise despite decades of climate diplomacy. World leaders will return to the negotiating table next year in Egypt to update their plans to cut emissions. Poorer countries will push to move discussions about climate reparations into hard cash.

"The outcome of COP26 is a compromise," said UN Secretary-General Antonio Guterres. "It is an important step, but not enough. We are still knocking on the door of climate catastrophe."