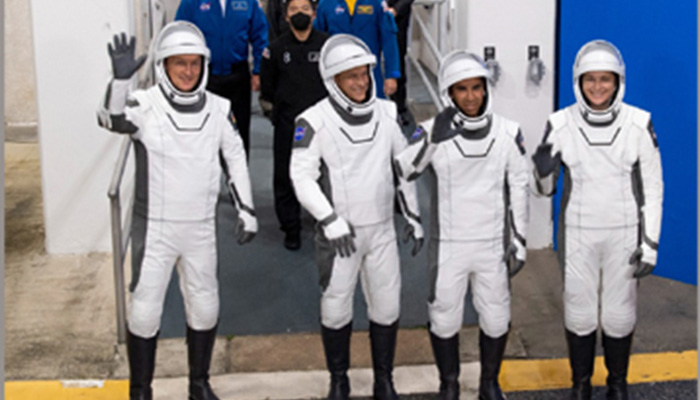 Marshburn is the pilot of the Crew Dragon spacecraft and second-in-command for the mission.

Chari is commander of the Crew Dragon spacecraft and the Crew-3 mission. He is responsible for all phases of flight, from launch to re-entry. He also will serve as an Expedition 66 flight engineer aboard the station. This will be the first spaceflight for Chari, who was selected as a NASA astronaut candidate in 2017.

He was born in Milwaukee, but considers Cedar Falls, Iowa, his hometown. He is a colonel in the US Air Force and joins the mission with extensive experience as a test pilot. He has accumulated more than 2,500 hours of flight time during his career.

Marshburn is the pilot of the Crew Dragon spacecraft and second-in-command for the mission. He is responsible for spacecraft systems and performance. Once aboard station, he will serve as an Expedition 66 flight engineer, and is scheduled to assume command of station for Expedition 67. Marshburn is a Statesville, North Carolina, native who became an astronaut in 2004.

Prior to serving in the astronaut corps, the medical doctor served as flight surgeon at NASA Johnson and later became medical operations lead for the International Space Station. The Crew-3 mission will be his third visit to the space station, having flown on three different spacecraft, and his second long-duration mission. Marshburn previously served as a crew member of STS-127 in 2009 flying aboard NASA's Space Shuttle Endeavour, and Expedition 34/35, which concluded in 2013, using a Russian Soyuz spacecraft.

Barron is a mission specialist for Crew-3. She will work closely with the commander and pilot to monitor the spacecraft during the dynamic launch and re-entry phases of flight. Once aboard the station, she will become a flight engineer for Expedition 66.
Barron was born in Pocatello, Idaho, but considers Richland, Washington, her hometown. She earned a bachelor's degree in systems engineering from the US Naval Academy in Annapolis, Maryland, in 2010, and a master's degree in nuclear engineering from the University of Cambridge, in England, in 2011, where she was a Gates Cambridge Scholar.

Barron earned her submarine warfare officer qualification and deployed three times while serving aboard the USS Maine. Her current rank in the US Navy is a Lt Cmdr. At the time of her selection as an astronaut candidate, in 2017, she was serving as the flag aide to the superintendent of the US Naval Academy. Crew-3 will be Barron's first spaceflight.

Maurer also will be a mission specialist for Crew-3, working with the commander and pilot to monitor the spacecraft during the dynamic launch and re-entry phases of flight. He also will become a long-duration crew member aboard the space station. Like Chari and Barron, he will be making his first trip to space with the Crew-3 mission. Maurer comes from Sankt Wendel, in the German state of Saarland. Before becoming an astronaut, Maurer held a number of engineering and research roles, both in a university setting and at ESA.

In 2016, Maurer spent 16 days on an undersea mission as part of NASA's Extreme Environment Mission Operations space analog.
This mission is the first spaceflight for astronauts Chari, Barron, and Maurer, and the third for Marshburn. Marshburn is the sixth person to launch from Earth on three different spacecraft.

During Crew Dragon's flight, SpaceX will monitor a series of automatic spacecraft maneuvers from its mission control center in Hawthorne, California, and NASA teams will monitor space station operations throughout the flight from the Mission Control Center at the agency's Johnson Space Center in Houston.

"With Raja, Thomas, Kayla, and Mattias on their way to the International Space Station just days after Crew-2's return, we're seeing the power of American ingenuity right before our eyes," Nelson said.
He added, "NASA's partnership with SpaceX is not only critical for cutting-edge research, but also for international collaboration. The space station brings together nations around the world for the benefit of all. Godspeed, Crew-3 - I can't wait to see all that you accomplish."

The Crew Dragon Endurance will dock autonomously to the forward port of the station's Harmony module around 7:10 pm Thursday, November 11. NASA Television, the NASA app, and the agency's website are providing ongoing live coverage through docking, hatch opening, and the ceremony to welcome the crew aboard the orbital outpost.

"Ensuring our crews have safe transportation and continued access to space is an enormous responsibility," said Steve Stich, manager with NASA's Commercial Crew Program. "We know the crew is excited to get on station and settle into their long-duration mission. The NASA and SpaceX team remains vigilant in support of their safe arrival and eventual return to Earth."

Chari, Marshburn, Barron, and Maurer will join the Expedition 66 crew of NASA astronaut Mark Vande Hei and cosmonauts Anton Shkaplerov and Pyotr Dubrov of Roscosmos. Crew-3 is the second commercial crew mission to fly an ESA astronaut.
"It is always thrilling to watch a rocket launch, especially when an international crew of astronauts is sitting atop it. Matthias Maurer is the second ESA astronaut to be launched in a Crew Dragon spacecraft under the US Commercial Crew Program," said Josef Aschbacher, ESA director-general.

He added, "We are delighted to see him fly alongside NASA astronauts to the International Space Station, continuing a long history of international collaboration in space for the benefit of Earth. On behalf of ESA, I'd like to wish all Crew-3 astronauts a productive and enjoyable mission."

The Crew-3 astronauts will spend approximately six months aboard the space station conducting new and exciting scientific research in areas such as materials science, health technologies, and plant science to prepare for human exploration beyond low-Earth orbit and to benefit life on Earth.
The Crew-3 mission continues NASA's efforts to restore and maintain American leadership in human spaceflight. Regular, long-duration commercial crew rotation missions enable NASA to continue the important research and technology investigations taking place aboard the station.

Such research benefits people on Earth and lays the groundwork for future exploration of the Moon and Mars, starting with the agency's Artemis missions, which include landing the first woman and person of colour on the lunar surface.